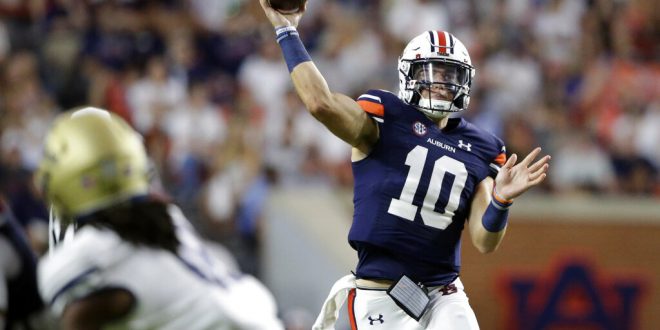 Auburn quarterback Bo Nix (10) throws a pass against Akron during the first half of an NCAA college football game Saturday, Sept. 4, 2021, in Auburn, Ala. (AP Photo/Butch Dill)

The Auburn Tigers will host in-state foe Alabama State at noon Saturday. Both teams are looking to improve to 2-0.

The Tigers find themselves ranked at 25 after their 60-10 win over Akron last weekend.

Tigers quarterback Bo Nix started the season with a near-perfect completion percentage as he found a receiver on 20 of 22 pass attempts. He finished with 275 passing yards and three touchdowns. He was not sacked Saturday.

Auburn saw four running backs score in the win. The quartet was led by Tank Bigsby who had 119 yards and two touchdowns on 13 carries. Nix got in on the running game too as he scrambled for 32 yards, bringing the team rushing total to 316 yards.

While the defense failed to get a takeaway, they did put points on the board. The unit managed to get a safety early in the third quarter. Akron was held to just 188 yards, all of which were passing. On 36 carries, the Zips could not obtain a positive rushing total.

The win marks the first of the Bryan Harsin era at Auburn. Harsin said this of his team’s performance:

Harsin is telling his players to stay focused this week as they face Alabama State Saturday.

The Tigers will use this game to prepare for their Week 3 road matchup with No. 11 Penn State.

The Hornets squeaked out a win last week over NCAA Division II opponent Milton College by a score of 14-13. The game ended in overtime when Golden Bears kicker Jake Anderson missed a field goal.

Milton College quarterbacks Octavious Griffin and Claude Newell combined for 35 passing yards. Griffin was responsible for both Golden Bears touchdowns, rushing for one and passing for another.

The last time these teams met was Sept. 8, 2018. Auburn won that match up 63-9. The Tigers are looking to replicate that feat Saturday. Game time is at noon, broadcast on SEC Network.