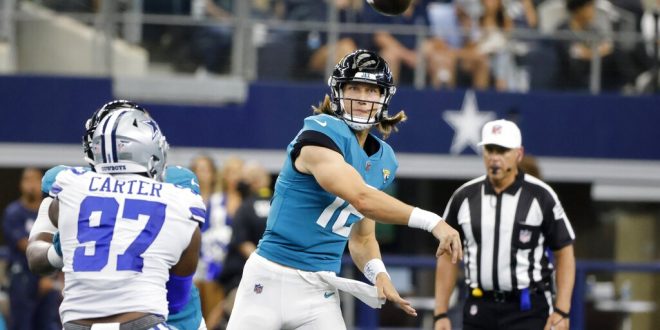 The new NFL season starts tonight. The Tampa Bay Buccaneers have the first game of the regular season tonight against the Dallas Cowboys.

But the rest of Florida does not have to wait long for their openers, because the Jaguars take on the Texans and the Dolphins face the Patriots on Sunday.

Jacksonville ended the preseason strong. After back-to-back losses against the Browns and the Saints, the Jags were able to get a win under their belt just in time for the start of the regular season. On August 29, they ended their preseason with a 34-14 victory against the Dallas Cowboys.

Miami was on the opposite side of the win-loss ratio, finishing preseason 2-1. They started slow with a loss to the Bears but followed with a win against the Falcons 37-17 and the Bengals 29-26.

Jacksonville faced the Texans twice during last season. Both games were victories for the Houston team. In October, they won 30-14. Then in November, they won at home, 27-25.

Against the Patriots, the Dolphins were 1-1 for last year. In their September game, New England walked away with a 21-11 victory over Miami. The South Florida team responded with a 22-12 win three months later.

The Duval team is looking to turn over a new leaf for the new season. Between their new head coach and their new starting quarterback, Jacksonville has been working hard to not have a repeat of last season.

Former Florida Gators head coach, Urban Meyer has taken the reigns of the team after a brief retirement following his time at Ohio State. Meyer is feeling confident heading into Sunday’s game.

“…this is a tone-setter, this is a setter for everything,” Meyer said. “But it’s also the first game.”

The former college coach has not lost a season opener since 1993. He did say that college is different from the NFL, though. As he prepares the team for Sunday’s game, Meyer said that it is best not to look too far ahead in thoughts about leading the AFC South.

“Now, it’s all about the most prepared team will win,” he said. “And Wednesday and Thursday is all about preparation and then we’ll get to that stuff later in the week.”

Along with Meyer’s new leadership, comes a new captain for the Jags.

Rookie quarterback Trevor Lawrence was named one of the captains for the new season.

“It’s a really cool feeling, especially as a younger guy just having that support from my teammates,” Lawrence said about the decision. “Like I said, from being named a starter to now a captain, nothing changes, same expectation. Now it’s time to go out there and win some games, but I’m really excited. It’s definitely an honor.”

He went on to say that being a captain gives more clarity to being a leader on the team, but that there are many players on the team that also serve as leaders without having the captain title.

Jacksonville’s opening kickoff will be Sunday at 1 p.m. in Houston.

After the back-and-forth between Ryan Fitzpatrick and Tua Tagovailoa, this year’s definite decision should make play more consistent.

Fitzpatrick is now starting quarterback for the Washington Football Team, and Tagovailoa was named the starter for Miami.

This will be the first regular-season game where Tagovailoa will have the opportunity to play alongside former Alabama teammate, Jaylen Waddle. Waddle was drafted to Miami this season as the sixth overall pick. He played with Tagovailoa for the Crimson Tide in 2018 and 2019.

Miami’s opening kickoff will be Sunday at 4:25 p.m. in Foxborough.

Six days of events as we celebrate our Home Opener next week!

Rylee is a fourth year journalism major with a specialization in sports and media at the University of Florida College of Journalism and Communications.
Previous No. 25 Auburn hosts Alabama State Saturday
Next Florida Soccer to take on No. 2 North Carolina