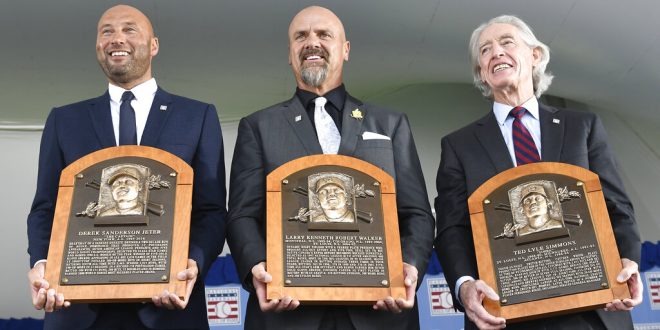 Hall of Fame inductees, from left, Derek Jeter, Larry Walker and Ted Simmons hold their plaques for photos after the induction ceremony at Clark Sports Center on Wednesday, Sept. 8, 2021, at the National Baseball Hall of Fame in Cooperstown, N.Y. (AP Photo/Hans Pennink)

The much-anticipated ceremony took place 13 months later than expected after the COVID-19 pandemic delayed festivities. Fans turned out for Derek Jeter in mass numbers, though, as Yankees pinstripes and No. 2 jerseys dominated the crowd.

He walked out to a standing ovation in front of Yankees and baseball fans alike at the Clark Sports Complex. After the chants and applause finally died down, Jeter began his speech by saying, “I forgot how good that feels.”

Jeter was a near-unanimous selection for the Hall of Fame; only one sportswriter voted not to induct him into the hall. He even poked fun at that lone sportswriter in his speech.

His former teammate, Mariano Rivera, remains the only baseball player to ever be a unanimous selection. But if anyone were to join Mariano in that honor, it would have been Jeter. Over his 20-year career, Jeter led the Yankees to seven pennants and five World Series titles while recording 3,465 hits, the sixth-highest in MLB history.

Smile if you're officially in the Hall. pic.twitter.com/TKNfQF88XD

Outside of joking about his nearly unanimous selection, Jeter remained sincere throughout his poignant speech, thanking his teammates, fans and family that helped him throughout his career. Of course, he paid tribute to the team that he became a symbol for in his long career with them. In front of an adoring crowd, he said how much being a Yankee meant to him.

The ceremony began with a touching tribute to the ten Hall of Famers who have passed away since the last induction ceremony in July of 2019. Hall of Fame catcher Johnny Bench narrated a video honoring the lives of those ten players, including Hank Aaron and Tom Seaver, that died since that last ceremony.

31 Hall of Famers attended the ceremony in Cooperstown on Wednesday, as well as NBA legends Michael Jordan and Patrick Ewing. Jeter gave a nod to the legends that came before him in his speech.

“When everyone asks about nerves, they assume it’s because of a speech, what I may say or not say, how many people are in attendance. No, no, no. The nerves are because of these people that are behind me now and all those who are part of the Hall of Fame family. Because the great thing about baseball is its history. That’s what makes it so special.”

With the induction of Jeter, Walker, Simmons and Miller, the Hall of Fame membership grew to 333.

During his speech, Walker said how special he felt to be a Hall of Famer after considering himself an “average” player for his whole career.

“I honestly see myself as an average guy. And I’m good with average. I’ve lived my life to never get too high and never to get too low. But to stand on this stage right now and to tell you I’m feeling average would be a complete lie. My feet have not touched the ground all day.”

Joining Jeter and Walker, Ted Simmons joined the hall after waiting for over 15 years. He fell off the BBWAA’s ballot in 1994, his first year of eligibility, and became the first player to be inducted after falling off the ballot in his first year. He had this to say about his journey.

“My path was long. But I wouldn’t change a thing.”

Marvin Miller was voted into the hall on Wednesday, and his successor as the head of the MLBPA, Donald Fehr, accepted the honor on his behalf. Miller died in 2012 and, like Simmons, was passed over several times by the veteran committee before being voted in last year.

During his career, he grew the MLBPA and helped players advocate for themselves and their careers.

Jeter and his fellow inductees are enshrined into the baseball history that, as Jeter said, make the game so special.

I'm a third-year student at the University of Florida passionate about storytelling and sportswriting. My goal is to work in communications for a professional sports team after I graduate.
Previous Buccaneers-Cowboys Kick Off 2021 NFL Season
Next No. 25 Auburn hosts Alabama State Saturday