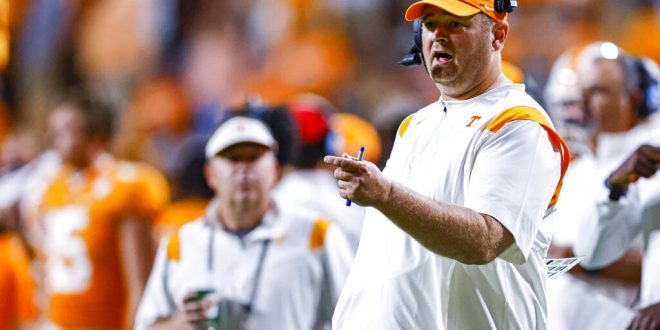 Tennessee coach Josh Heupel shouts to players during the first half of the team's NCAA college football game against Bowling Green on Thursday, Sept. 2, 2021, in Knoxville, Tenn. (AP Photo/Wade Payne)

Unfamiliar yet familiar foes: that’s the best way to describe this weekend’s matchup between Josh Heupel and the Tennessee Volunteers taking on the Pittsburgh Panthers.

The two programs have not faced each other in almost 40 years, with their last contest dating back to 1983. However, what they have in common is a legendary Hall of Fame coach that once manned both sidelines.

Saturday’s bout at 12 p.m. will be referred to as the Johnny Majors Classic, honoring the late great head coach and player Johnny Majors.

As a player, Majors starred for the Volunteers as an All-American and was the Heisman Trophy runner-up in 1956. Transitioned into a head coach, Majors led Pitt to a national title in 1976. He’d eventually return to his alma mater and guide Tennessee to three SEC Championships.

Both teams are 1-0 coming off resounding victories last weekend, with Tennessee defeating Bowling Green 38-6 and Pitt manhandling UMass 51-7. But this matchup will be the first true test for both opponents.

The Tennessee offense will once again be led by QB Joe Milton. The Michigan transfer started off strong against Bowling Green but soon struggled with accuracy, completing only 11 out of 23 passes.

The rushing efforts of Milton and RBs Jabari Small and Tiyon Evans were enough to pad the Vols’ comfortable win, but a more sound Pitt defense will force Milton to throw the ball this time around.

Coach Heupel is confident in the development of QB play as the season progresses.

Pittsburgh will have veteran fifth-year senior Kenny Pickett lead the offense. Pickett had a solid performance against UMass, completing 27/37 passes and airing out 272 yards along with two touchdowns as he looks to keep things rolling this weekend.

As Heupel said in his presser, it should be a hard-fought, physical battle in tribute to the legendary Majors.