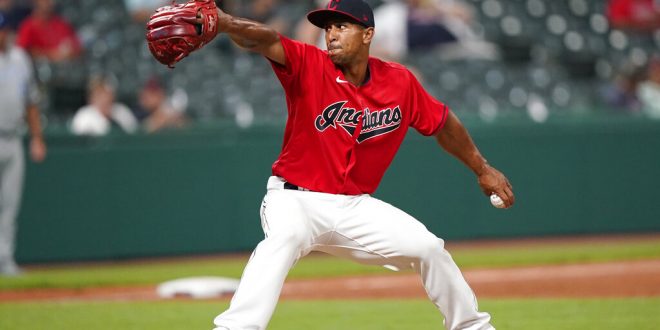 Cleveland Indians right-hand pitcher, Anthony Gose, made his first Major League Baseball appearance in five years. He appeared in the bottom half of the doubleheader when the Tribe lost 4-2 against the Kansas City Royals.

Gose took the mound in the top of the fourth inning and pitched 1 2/3 innings, throwing 39 pitches. He leaned heavily on the heater throwing 31 four-seam fastballs. Eight of the 31 fastball pitches reached 100 miles per hour while his lowest speed for the fastball was 97 mph.

Notably, at the top of the fifth inning, Gose struck out Salvador Perez, Royal’s Catcher who leads the league with 46 home runs and 115 RBIs.

Gose, who reinvented himself as a pitcher, expressed gratitude for the process.

Coming out of the 2008 draft class straight out of high school, Gose was selected as an outfielder by the Philadelphia Phillies. This was a draft class loaded with talent with players like Eric Hosmer selected with the third pick and Buster Posey with the fifth pick. Gose was the 51st overall pick, selected in the second round.

Gose’s career has been filled with adapting to new surroundings, moving around to several teams.  From being selected in 2008 by the Phillies to making his Major League Debut in 2012 with the Toronto Blue Jays as a left fielder, and then traded to the Detroit Tigers in 2015 and 2016 as a centerfielder. Five years later, in 2021 playing for the Cleveland Indians as a pitcher.

And over a decade later, Gose’s love for the game remains the same.

Gose reflected on the coaches and players that have helped him along his journey, especially during his time with Team USA in the 2020 Olympics.

There has been a common theme of patience with Gose’s journey, waiting for the opportunity to help his team.