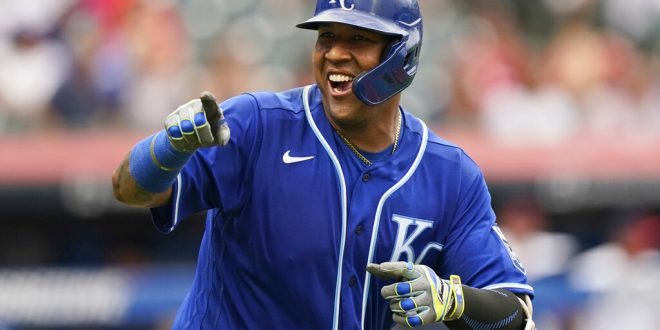 Kansas City Royals' Salvador Perez smiles and points to the dugout after hitting a two-run home run in the fifth inning in the first baseball game of a doubleheader against the Cleveland Indians, Monday, Sept. 20, 2021, in Cleveland. The home run broke Johnny Bench's record for the most home runs in a season by a primary catcher. (AP Photo/Tony Dejak)

After the game, Perez talked about what it meant to be in the same conversation as Bench.

“When I see a hall of fame catcher like him [Johnny Bench], I just try and be like him.”

After 21 long balls in the first half of the season, Perez has caught fire, now tied with Vladimir Guerrero Jr. for a league-leading 46 home runs.

Not only has he been successful with the homers, but he also leads the league in RBIs with 115.

“The feeling is amazing. My career goal was 30 home runs and 100 RBIs. It is now dream come true. It has been an unbelievable season for me.”

However, Perez admits he has not done it alone.

“It’s a lot of work, but I have not done it all by myself. The trainers, teammates, everyone have helped.”

Perez followed this up by talking about Yadier Molina being a big motivation for him throughout his career.

“Yadi and Bench are the greatest catchers in the game. I do my best to compete like they did.”

Although the Kansas City Royals are among the worst teams in baseball, Perez has given fans across the sport a reason to keep an eye on the team. Perez has been doing it all behind the dish as well, throwing out runners at 45%, his best since 2018. Perez is hitting at .270 to go along with his 46 home runs and 115 RBIs.