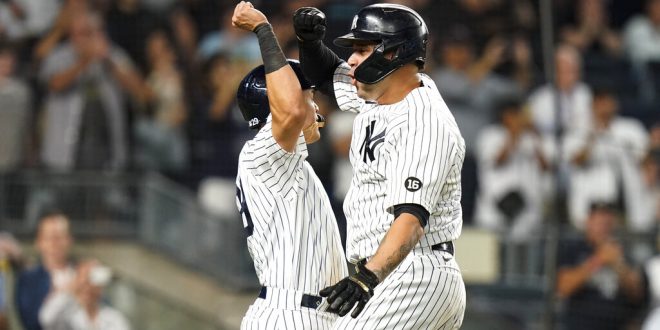 The New York Yankees (86-67) completed their sweep of the Texas Rangers (55-97) with a 7-3 win on Wednesday. With the win, the Yankees overtake the Toronto Blue Jays (85-67) for the second American League Wild Card spot.

The AL Wild Card race will likely come down to the Blue Jays, Yankees and Boston Red Sox (88-65). The Yankees remain two games behind the Red Sox, but they now enter a crucial slate to end their season with series against the Sox, Blue Jays and Tampa Bay Rays (94-59).

So, how did the Yanks manage to sweep the Rangers, and what will they have to do to maintain that Wild Card spot through the rest of the season?

It’s no secret that the Yankees struggled mightily after their 13-game winning streak came to a close. They lost 11 of their next 13, including series losses to the Orioles, Angels and Blue Jays.

But since that tough stretch, New York has seemed to have found their groove again. They’ve won seven of their last ten games, taking a series against the Orioles and sweeping the Rangers at home.

New York trailed Texas 3-0 in the fifth inning on Wednesday before eventually tying it in the sixth. From there, a four-run eighth inning propelled them to a 7-3 victory. Aaron Judge and Gary Sánchez homered in the win, and Chad Green earned the win pitching a scoreless eighth inning.

The Yankees have gotten some good news recently, as well, that could help in their push to the playoffs. Luis Severino pitched in an MLB game for the first time in 707 days on Tuesday. The Yankees ace finished his long journey back from Tommy John surgery and pitched two scoreless innings in a 7-1 win.

The Yankees hope Severino will be able to make a difference from the bullpen as they enter the home stretch of the season. And with the difficulty of their remaining games, the Yanks will need all the help they can get.

The Bronx Bombers started winning at the right time because few teams have as difficult of a remaining schedule as the Yankees do. They’ll travel to face the Red Sox at Fenway and then play in Toronto against the Blue Jays. Then, they’ll wrap up their season with a three-game series against the Rays at Yankee Stadium.

So, there’ll be no freebies for the Yankees in the next 12 games – just three serious playoff contenders. But, as Yankees skipper Aaron Boone mentioned, they have everything in front of them.

By playing the two teams they’re battling with for a Wild Card spot, the Yankees won’t have to rely on favors from any other teams. Gerrit Cole will start on Friday in New York’s series opener in Fenway. He said regardless of past results, everything will come down to these final games.

The Blue Jays face a slightly easier schedule to wrap up the season with series against the Twins and Orioles in addition to their games against New York.

And after hosting the Yankees, the Red Sox will go on the road to play two sub-.500 teams in the Orioles and the Nationals. So, if the Yankees want to play some playoff baseball in October, they’ll have to win. A lot.

I'm a third-year student at the University of Florida passionate about storytelling and sportswriting. My goal is to work in communications for a professional sports team after I graduate.
Previous Gators Soccer To Face Kentucky
Next Panthers visit Texans in Thursday Night Football