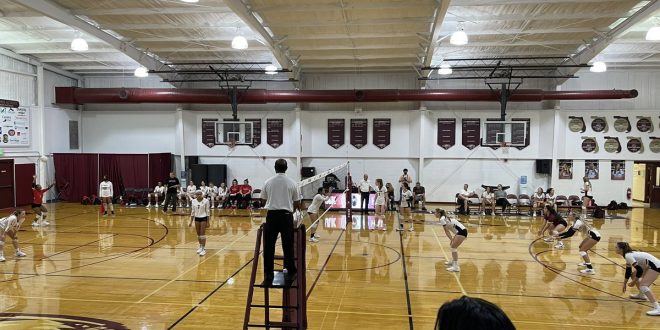 Oak Hall Girls Varsity Volleyball (10-5) gave it their all as they played Santa Fe High School (13-2) at home Thursday evening. Hoping to clinch the win, they received the opposite with a tough loss.

Where it All Began

Oak Hall and Santa Fe both began warmups with high energy, ready for a battle between the two. The crowd was pumped up after a win for the Oak Hall Junior Varsity team. As the game began, fans cheered on the Lady Eagles, encouraging the fight to victory over the No. 4 team in the state.

At the start of the first set, Santa Fe and Oak Hall went back and forth between points. Santa Fe won a point, then Oak Hall won a point.

However, that quickly changed as Santa Fe became dominant, racking the score up to 8-3 when a timeout was eventually called. The coaches gathered their teams and began to give their players advice and words of encouragement.

Oak Hall continued back onto the court to attempt to up their score. They end the first set 25-10, giving Santa Fe their first set point.

Back to the Beginning

As the second set of the match begins to start, the Lady Eagles and fans are hopeful for a better outcome. The points begin to rack up with standouts Cate Cannon (5) and  Sophia Aulisio (10) helping to make way for Oak Hall.

Throughout the game, Aulisio, senior outside hitter and setter, can be seen motivating her teammates, giving them high fives, and bringing positive energy to the environment. One mom in the crowd is encouraging her daughter’s team, “Keep working at it ladies, you got this!”

Keeping the energy up, Oak Hall continues into the third set with a smile on their faces. Both teams manage to sneak points in. Santa Fe fools Oak Hall as the ball hits the net. Suddenly, it bounces off and over into the Lady Eagles territory, catching them by surprise and giving Santa Fe the point. Oak Hall later comes back as Aulisio hammers the ball into the opposing side. One Santa Fe player attempts to save it, but instead hits it out of bounds, allowing for Oak Hall to gain on them.

However, it was not enough. Fighting until the very end, Oak Hall falls once again. The third set ends 25-11, giving Santa Fe the match win, 3-0.

The ladies of Oak Hall Varsity Volleyball showed extreme sportsmanship despite their weary loss. They embraced each other, ready to fight the next battle.