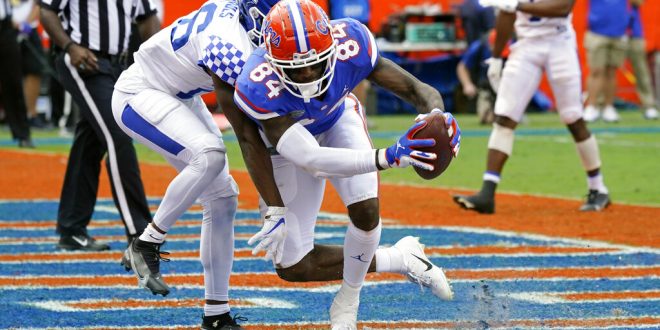 FILE - Florida tight end Kyle Pitts (84) catches a pass in front of Kentucky defensive back Brandin Echols for a 2-yard touchdown on a pass play during the second half of an NCAA college football game in Gainesville, Fla., in this Saturday, Nov. 28, 2020, file photo. No. 6 Florida doesn't really even try to run the ball anymore. There's an occasional handoff here and there, but the Gators are mostly one-dimensional _ and that's fine with coach Dan Mullen, Heisman Trophy front-runner Kyle Trask and arguably the deepest receiving corps in the country.(AP Photo/John Raoux, File)

The Gators may be on upset alert this weekend as they travel to Lexington in their first true road game of the season. Moving up to No. 10 in the latest AP Poll, Florida takes on the unranked but unbeaten Kentucky Wildcats.

Earlier in the season Gator fans filled Raymond James Stadium in their blue and orange. With just a two-hour commute, fans flocked to Tampa to see the Gators take on USF.  However, this weekend’s SEC showdown won’t be as fan friendly for Head Coach Dan Mullen.

After defeating Tennessee this past weekend, 38-14, the Gators earned their first conference win of the season.

Even without defensive back Kaiir Elam, Todd Grantham’s defense played fairly well, shutting out the Volunteers in the second half.  Still, the Gators should expect a confident Wildcat team. Kentucky is coming off a 16-10 victory over South Carolina, and is 2-0 in SEC play.

Gators Staying Home in the secondary

Already without cornerback Jaydon Hill with a torn ACL, the young secondary displayed a next man up mentality. Grantham looked to redshirt freshman Avery Helm, who took on that responsibility with Hill out.

Helm didn’t see much action last year, appearing in just one game. However, Helm stepped into this year winning the starting position opposite of Elam. Through four games the former four-star recruit has recorded seven tackles and two pass breakups.

In fact, Helm says with the experience he accumulated through four weeks, he’s feeling his play is growing at a fast rate.

The improved play from Helm should continue. However, heading into a hostile environment like Kentucky, veterans like senior safety Trey Dean and Elam are needed.

Fortunately, Elam, who suffered a knee sprain at the end of the Alabama game, is expected to suit up this week.  And Dean, leading the team in total tackles, has provided much needed leadership in the secondary.

A general component of a great defensive unit is its communication on the field and it seems like Florida doesn’t lack in that department.

Helm says the biggest factor in great communication on and off for the secondary comes from the genuine desire of everyone wanting each other to succeed.

Also, Helm continued to share praises on how much he has learned from Dean already this year.

He continued to say that he can’t wait to experience the atmosphere in Kentucky after speaking with players like Dean, who previously played there.

Heading into Lexington, facing a heavy play action team like the Wildcats, expect Kentucky to test the Florida’s secondary.

But, giving up a 75-yard pass touchdown to Tennessee early, Helm says eye discipline is key to minimize the big plays this week.

This Saturday at 6 p.m., the Gators look to repeat their performance from 2019 when they faced Kentucky in Lexington, where former Gator quarterback Kyle Trask lead Florida to a 29-21 win.