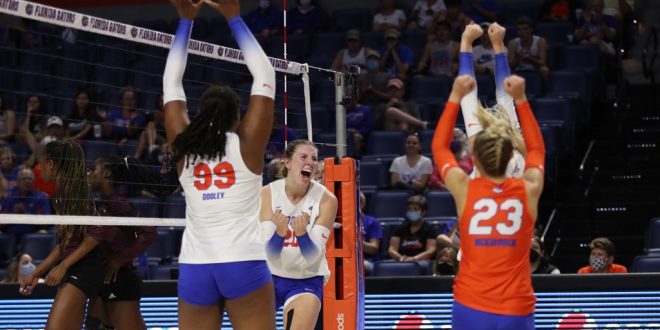 Scenes from the Gators 3-2 win against Mississippi State. Photo by Jordan McKendrick

Florida Volleyball will return to the Exactech Arena after grabbing a win on the road against Georgia in straight sets. The Gators (8-5) will begin a two-match series against the Ole Miss Rebels (12-1) this Saturday at 3 p.m. The series finale is set for Sunday at 1 p.m.

A Look at Ole Miss

This week, Ole Miss snapped a 12 game winning streak when they lost to Kentucky, last year’s national champions, in five sets. Ole Miss sits at an even 1-1 record in the SEC as they look to push it to a winning one this weekend with the Gators.

The Rebels bring a few weapons to the Swamp on Saturday. The Ole Miss offense will pose as a threat as their .292% hitting percentage is number one in the conference. Meanwhile, Florida sits just below them in second place at .287%. On the defensive side, libero Sam Burgio has recorded 131 digs this season contributing to the overall 13.22% per set percentage.

A fight to the finish.

The No. 22 Gators have put up impressive stats so far this season. T’ara Ceasar has reached double digits in kills in 11 consecutive matches. In addition, setter Marlie Monserez has surpassed the 3,000 assist mark becoming only the seventh Gator in history to do so. In the backcourt, libero Eli McKissock is doing her job getting under her opponent’s kills and has posted 187 digs on the season.

Parker Welch is a Senior at the University of Florida majoring in Sports Media at the College of Journalism & Communications.
@parkerrwelch
Previous Gator Receiver Justin Shorter Loves Doing All the Little Things
Next Trent Whittemore’s Enjoying His Time With the Gators