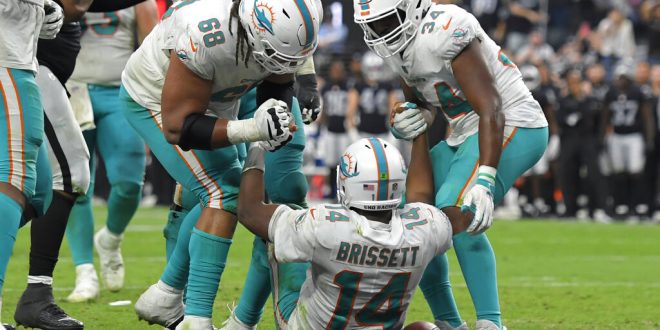 Miami Dolphins offensive guard Robert Hunt (68) and running back Malcolm Brown (34) help up quarterback Jacoby Brissett (14) after Brissett scored a touchdown against the Las Vegas Raiders during the second half of an NFL football game, Sunday, Sept. 26, 2021, in Las Vegas. (AP Photo/David Becker)

Two playoff hopefuls entering Week 1 of the 2021 NFL season are now fighting for their lives entering Week 4. The 0-3 Indianapolis Colts travel to South Beach to take on the 1-2 Miami Dolphins in a Sunday 1 p.m. clash.

The Colts are not your typical, pitiful 0-3 team. Indianapolis had possibly the toughest three game schedule to start the season in the entire league.

They faced the Russell Wilson led Seattle Seahawks in Week 1, followed by a Matthew Stafford orchestrated Los Angeles Rams team in Week 2. Things did not get any easier for the Colts in Week 3, as they visited a high-powered Tennessee Titans offense in which they had no answers for superstar RB Derrick Henry.

To make matters worse for Indy, each game was relatively close. Not one matchup was decided by more than two possessions.

Indianapolis has also been plagued by injuries. Starting QB Carson Wentz is dealing with two sprained ankles which has hindered his play. Wentz struggled to get anything going last week against the Titans, completing just 19 out of 37 passes with no touchdowns.

Furthermore, All-Pro offensive guard Quenton Nelson sprained his ankle last week against Tennessee. Nelson is doubtful to play this Sunday, according to Colts head coach Frank Reich. This would be a massive blow for a Colts offense that so desperately needs a spark.

The Dolphins started off the season on a high note, defeating the New England Patriots in Week 1 at Foxboro. However, they would soon lose their starting quarterback and suffer two demeaning losses.

Tua Tagovailoa suffered broken ribs in Week 2 against the Buffalo Bills and was placed on the injured reserve. The soonest he can return to action is Week 6.

Filling in for Tua under center since has been Jacoby Brissett. Brissett, a former starter for Indianapolis, signed with Miami this past offseason after the Colts elected not to bring him back. In interviews this week, Brissett has denied wanting to have any “revenge” against his old team. But he may still have a chip on his shoulder and will look to prove his worth.

This game will likely be emphasized by the rushing attack on both sides. The Dolphins and Colts rank 27th and 28th respectively in opponent rushing yards per game.

With Carson Wentz’s nagging ankle injuries, he may look to run the football more with young phenom Jonathan Taylor. Taylor has yet to find the endzone through three weeks this season, but has a great opportunity to find pay dirt on Sunday.

Dolphins head coach Brian Flores will likely continue to deploy a more conservative offense while his backup quarterback remains at the helm.

Whoever loses this contest will likely have dug too deep of a hole to surmount. To keep any prospects of a playoff appearance alive, both the Colts and Dolphins need their teams to come out on top Sunday at Hard Rock Stadium.