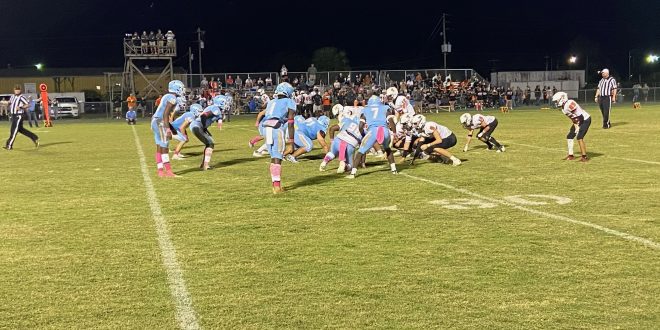 The Chiefland Indians (5-0) surged past the Trenton Tigers (1-4) on Friday night by a score of 42-0 as they extended their win streak to five games.

The hype for Friday night’s matchup between these two teams was high. This game is dubbed the “Battle of 129” by Chiefland Head Coach Adam Gore and its previous participants.

Indians Cash In on Early Opportunities

From the start, the energy from both teams was elevated. On the first kickoff, Chiefland returned the ball to the Trenton 19 yard line but fumbled as the returner was going to the ground. A big return that turned sour for the Indians.

However, they would mitigate this pain on the succeeding play by stripping the Tigers and recovering a fumble of their own. This would be the first of many times the Indians defense set up the offense in great position.

They would take over at the four-yard line and immediately turn it into points via a rushing touchdown by Jamie Strong. This would give Chiefland a 7-0 lead early in the first.

On the next possession, the Indians would force the Tigers to punt. As they went to punt the ball away, they were smothered by the Chiefland special teams unit who blocked the punt. This led to another opportunity for the Indians’ offense to score. The Indians punched the ball in a couple of plays later behind fullback Junior Brown. This would put them up 14-0 halfway through the first quarter.

Junior Brown with the touchdown to cap of the short drive from Chiefland.

The Trenton offense would falter once again and punt the ball back to the Indians early on the next drive. The Chiefland offense wasted no time scoring one more touchdown in the first. On this occasion, Clint Thomas would explode for a run well over 60 yards and a touchdown. Thus strengthening their hold over the game, securing a 21-0 lead over the Tigers.

Defense Controls the Rest of the Way

Early on in the second, the Indian defense continued to put relentless pressure on the Tiger offense.  This harassment led to Chiefland easily intercepting an errant pass from the Trenton quarterback.

Interception by #3 Donovan Minichello early in the 2nd Quarter of the Chiefland Trenton rivalry game.

Instantly, the Chiefland offense would capitalize off this mistake by way of wide receiver Dakota Fisher. Fisher took a jet sweep the distance, shifting around defenders and making his way to the end zone. Increasing the ever-growing lead to 28-0.

The defense would put the nail in the coffin with two final touchdowns of their own. One coming by way of an impressive pick-six that was close to 60 yards. The other touchdown was supplied by a scoop-and-score of around 40 yards from defensive end Lawrence Rivers.

After both of these scores, Chiefland finished the first half on top of Trenton 42-0.

Chiefland’s insurmountable lead would result in a running clock for the second half. Making for a quiet ending with neither team creating many opportunities to score. A combination of four total drives from both teams resulted in zero points.

The final score would stay at 42-0 in favor of Chiefland over Trenton. Coach Gore said he was proud of his team’s defense and special team’s efforts in tonight’s rivalry win.