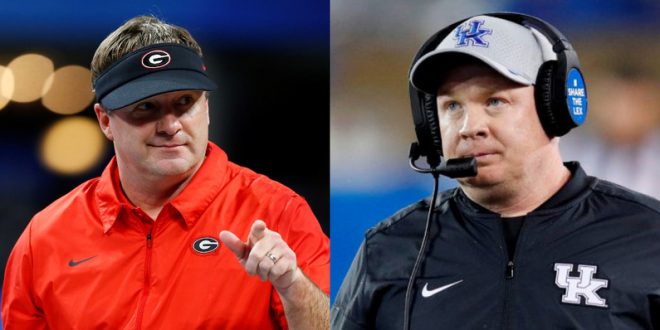 Georgia is the nation’s top team following its 34-10 victory at Auburn last Saturday. Simultaneously, Kentucky climbed five spots in the AP Top-25 to No. 11 after it knocked off LSU at home, 42-21. The undefeated SEC East rivals will clash in Athens, Ga., this Saturday. On paper, it will be a battle between two elite defenses. The Bulldogs lead the nation in scoring defense (5.5 points per game) and yards allowed per game (203.5) and the Wildcats rank inside the top-15 in both categories.

Ole Miss prevailed in a 52-51 shootout at home against Arkansas last Saturday. The Rebels fifth-ranked rushing offense gained over 300 yards on the ground for the third game this season. Junior Ole Miss running back Snoop Conner scored three second-half touchdowns including this season-long, 51-yard run.

The Rebels and Razorbacks traded spots in this week’s AP Poll. Ole Miss is now ranked No. 13 and Arkansas is No. 17.

Following the loss, the Crimson Tide dropped in the national rankings from No. 1 to No. 5. Conversely, the Aggies earned their way back into the top-25.

Week seven includes a full slate of SEC matchups. Besides Georgia versus Kentucky — set to air on CBS Saturday at 3:30 p.m. — there are no ranked matchups.

Arkansas will host Auburn, Florida will face LSU in Death Valley and Missouri will welcome Texas A&M for noon kickoffs. Meanwhile, Vanderbilt and South Carolina will meet in Columbia, S.C., at 4 p.m. in search of each team’s first conference win.

At 7 on ESPN, Alabama will look to bounce back in Starkville, Miss., against Mississippi State. Lastly, Ole Miss will face Tennessee on the road at 7:30 p.m. on the SEC Network.

Hello, I am currently a junior at UF studying sports media journalism with a concentration in Political Science. I contribute web and radio content weekly for WRUF ESPN Gainesville. Be sure to check out some of my recent articles!
Previous Around The NFL: Week Five
Next Ravens Host the Colts for Monday Night Football