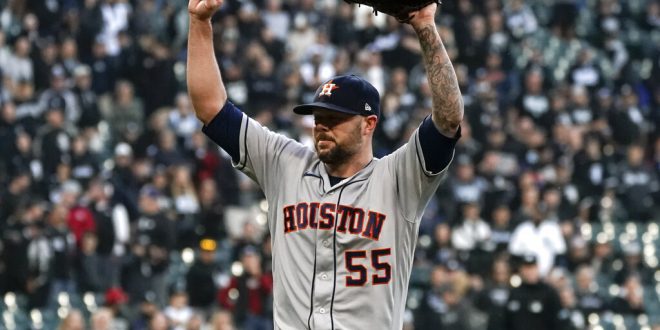 On Tuesday, the Houston Astros advance to the ALCS after a blowout win against the Chicago White Sox in ALDS Game 4. The Astros clinched a spot in the ALCS with a 10-1 victory. They will be playing the Boston Red Sox, a rematch of the 2018 ALCS.

Astros starter Lance McCullers Jr. had a sluggish start, only pitching four innings. However, his only fault was a solo shot by designated hitter Gavin Sheets.

Sheets led the White Sox to an early lead in the bottom of the second inning, lashing a home run into center-field. However, the Astros took the lead for good in the third thanks to a Correa’s double into left field to score Jose Altuve and Alex Bregman.

Martin Maldonado extended the lead at the top of the fourth to send Kyle Tucker home for a 3-1 lead. Soon afterward, Bregman piled on a two-run double to leave the Astros up, 5-1.

Additionally, in the sixth and eighth innings, Left fielder Michael Brantley hit a pair of RBI singles, stretching Houston’s lead to 7-1. Then, Altuve smashed a late three-run homer to end Chicago’s hopes of a comeback.

The White Sox led the league in stolen bases given up, a drawback that persisted into the postseason. Three uncontested stolen bases by the Astros contributed to Chicago’s demise in Game 4 of their ALDS matchup. Head coach Tony La Russa said it was being addressed before the postseason, but it never got fixed.

Tuesday’s win keeps the Astros firmly on course for a third World Series appearance since their scandal-tainted victory over the Los Angeles Dodgers in the Fall Classic in 2017.

The @Astros are the 3rd team to go to 5+ straight League Championship Series. pic.twitter.com/L8F6J9yMcJ

The Astros will go against Alex Cora’s Boston Red Sox in the ALCS. Cora was formerly the bench coach in Houston and a key figure in the sign-stealing scandal that tarnished Houston’s 2017 title. Though, he was later suspended for the 2020 season but was re-hired in Boston for 2021.