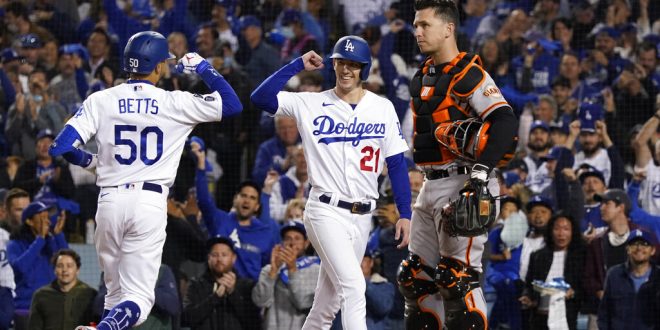 The San Francisco Giants (107-55) host the Los Angeles Dodgers (106-56) in Game 5 of the NLDS on Thursday. Both teams have won at least 108 games this season, including the playoffs, so this next game will determine who continues in the playoffs and who goes home.

An iconic rivalry reaches a new height.
⠀⠀⠀⠀⠀⠀⠀⠀⠀
Who takes it tomorrow? pic.twitter.com/rSDVUNpNRv

The Giants narrowly won the NL West in the regular season with one more win than the Dodgers. Los Angeles defeated the St. Louis Cardinals in their Wild Card game, though, to force one final chapter of what has been an epic rivalry in the MLB this season.

Julio Urias (1-0, 1.80 ERA) will face Logan Webb (1-0, 0.00 ERA) on the mound in this one. Webb authored a Game 1 victory for the Giants in historic fashion in his last start. In his first career postseason start, Webb became just the fourth pitcher in history to pitch at least 7 2/3 shutout innings, allow fewer than five hits, strike out 10 batters and give up zero walks.

What’s possibly more impressive, though, is the company that he joined in that achievement. The other three pitchers to do that were Jake Arietta, Trevor Bauer and Cliff Lee. Giants manager Gabe Kapler explained his game plan for using Webb in Game 5.

In the other dugout, Urias will get the ball to start for L.A. on Thursday. Urias led the Dodgers to victory in Game 2, pitching five innings and holding the Giants to one run and three hits.

Urias has been dominant in the postseason over his career, touting a 5-0 record and 1.29 ERA. Kapler spoke on the strengths of the Dodgers’ pitching.

This series has gone back and forth, with both teams alternating victories. The series also hasn’t seen a single lead change, but that doesn’t mean it hasn’t lacked any tense or competitive moments.

“I was hoping it wouldn’t come to this. I was hoping we could win in three straight. The way that the regular season played out, absolutely, I’m sure it was inevitable.”

Gavin Lux shone in Game 4, picking up two walks and a couple of singles. Mookie Betts is also swinging a hot bat in the NLDS, going 7-for-20 with an .864 OPS. For the Giants, Kris Bryant has played well in the postseason, going 6-for-13 with a home run and two RBIs.

So, how important will it be to play in Oracle Park? For one, the Giants went 54-27 at home. Also, the atmosphere for Game 1 in San Francisco was chaotic, with fans packed in the stadium and chanting, “Beat L.A.” Expect a similar atmosphere tonight.

I'm a third-year student at the University of Florida passionate about storytelling and sportswriting. My goal is to work in communications for a professional sports team after I graduate.
Previous Turning the Page in Las Vegas
Next Ja’Quavion Fraziars Emerging for the Florida Gators