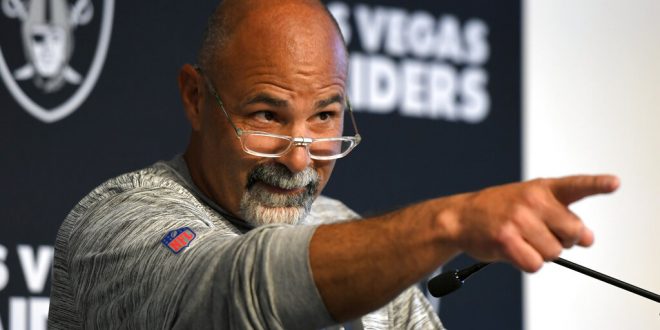 Gruden took the job as Raiders Head Coach in 2018, his second stint with the team. In three years he accumulated a record of 22-31. Gruden was in the fourth year of a 10-year contract worth about $100 million. Times have changed for the Raiders.

Las Vegas named Rich Bisaccia as interim head coach. Bisaccia was previously the special teams coordinator and and an assistant head coach for the Raiders over the last three years.

The Raiders, who are currently 3-2, are looking to turn the page. Las Vegas travels to Denver for a big AFC West Division matchup. Mayock acknowledged that even with the coaching change, the season is not over.

After starting the season with three straight wins, the Raiders have dropped back to back games to the Chargers and Chicago Bears. Las Vegas has struggled to score the last two weeks averaging just 11.5 points per game. Quarterback Derek Carr has thrown two touchdowns and  two interceptions over the last two games.

The offensive line has struggled to protect Carr of late giving up seven sacks over the last two weeks. The defense has not been great either. While the team has three wins, the defense is giving up 24 points a game. The offense used to bail out the defense, but now the defense needs to step up.

As for special teams, place kick Daniel Carlson is doing his job. Carlson is 10-for-11 on field goals and 9-for-10 on extra points. Punter A.J. Cole has also placed just under half of his punts (10 of 23) inside the 20 yard line. Bisaccia now looks to translate his special teams success to the entire team. Mayock is not worried.

As for what the head coach position looks like long-term, Mayock has not made that decision yet.

Trey is a third year sports media major at the University of Florida, and a WRUF reporter.
@@treyboogie5
Previous Brady & The Buccaneers Kick Off Week 6 in Philly
Next Dodgers and Giants Conclude Epic Rivalry in Game 5 of NLDS

The Las Vegas Raiders were close-game hero’s in this wild 2021 season. They were the …