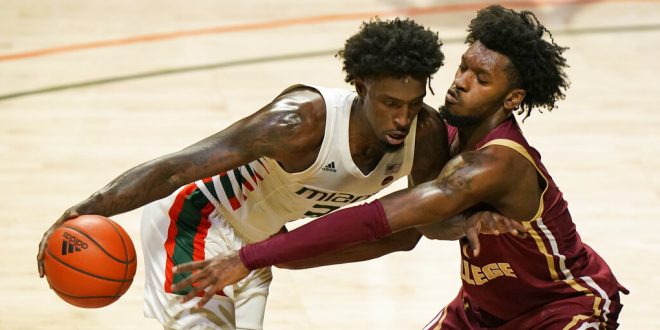 FILE - Miami center Nysier Brooks, left, drives against Boston College forward CJ Felder during the first half of an NCAA college basketball game, Friday, March 5, 2021, in Coral Gables, Fla. Florida added Boston College transfer CJ Felder, and the Gators have – at least on paper – their best collection of defenders since Scottie Wilbekin, Casey Prather, Will Yeguete and Patric Young ran roughshod through the league in 2014 and advanced to the Final Four.(AP Photo/Wilfredo Lee, File)

From the Transfer Portal

Last season, CJ Felder was in his sophomore season with the Boston College Eagles. The team played a limited season due to the COVID-19 pandemic, but with an increased starting role on the roster, Felder had a breakout season of sorts. The forward averaged 9.7 points and 5.9 rebounds over 19 games. He was one of only a few positives, however, for an Eagles squad that finished the season at 4-16.

Boston College’s struggling performance wasn’t the only thing that attributed to Felder leaving Boston, though. Speaking to the media, the 6’7” forward mentioned that the program’s “turnover” was the “driving force” in him entering the transfer portal. Many of those Felder developed a relationship with on the team left or transferred. Soon after, Gators head coach Mike White was in contact with Felder and he committed to Florida. Admittedly “homesick,” the Sumter, South Carolina native is looking forward to playing closer to home.

Felder mentioned that his Sumter upbringing has helped him develop a tough mindset. Florida fans will be looking forward to Felder bringing that to team. The Gators have struggled somewhat inside during Mike White’s tenure. Felder, however, is a strong rim protector and will add a welcome defensive presence to the team. Last season with the Eagles, the forward contributed heavily to the defensive side of the ball and averaged 2.2 blocks per game.

Felder’s also been getting to work developing relationships on the squad. Asked by the media about teammate Keyontae Johnson, Felder mentioned that Johnson’s made the transition to Florida easier.

Felder will be looking to help the Gators improve on their 15-10 record from last season, which ended in a disappointing tournament upset loss to a 15-seed Oral Roberts team. The Gators will be hosting an exhibition game at the O’Connell Center on November 1 against the Embry–Riddle Eagles, before kicking off the regular season at home on November 9 against the Elon Phoenix.