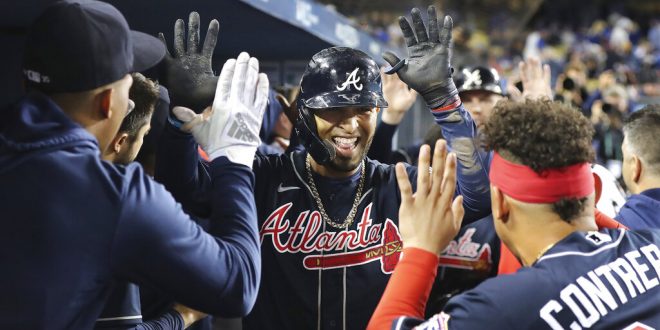 Atlanta Braves' Eddie Rosario gets high-fives in the dugout after hitting a three-run home run against the Los Angeles Dodgers in the ninth inning of Game 4 of the baseball NL Championship Series, Wednesday, Oct. 20, 2021, in Los Angeles. (Curtis Compton/Atlanta Journal-Constitution via AP)

The Atlanta Braves defeated the Los Angeles Dodgers 9-2 Wednesday night in Game 4 of the National League Championship Series. The Braves now lead the series 3-1, with the potential to clinch their first World Series berth since 1999.

Rosario stayed hot by hitting a triple in the top of the third. Joc Pederson would extend the Braves’ lead to 4-0 with an RBI single to bring home Rosario. The offense kept rolling into the fifth, with a sac-fly by Duvall allowing Ozzie Albies to score and extend Atlanta’s lead to 5-0.

The Dodgers responded in the bottom of the fifth with a 2-RBI single, but they recorded just one hit the remainder of the game.

Atlanta held a three-run lead going into the ninth, but the Braves weren’t done yet. Freeman hit a ground-rule double that brought in another run. With runners on first and second, Rosario stepped to the plate and crushed a hanging slider over the right field wall and into the Braves’ bullpen. That would seal the deal for Atlanta, extending their lead to 9-2.

As Rosario rounded the bases, thousands of Dodgers fans rose from their seats and began to leave the stadium. Rosario, a contender for NLCS MVP, finished the night 4-for-5 with two home runs, a triple and 4 RBIs. There’s no question Rosario’s bat is hot, and he isn’t letting go of it any time soon. He’s been using the very same bat since Sept. 19, when he hit for the cycle against the San Francisco Giants.

“I’ve been using that bat that I hit for the cycle with and it has not disappointed,” Rosario said. “I had that double remaining, and I’m like, man, this bat has not let me down yet.”

A Frustrated and Struggling L.A. Team

Dodgers’ starter Julio Urias wouldn’t pitch his first strikeout until the fourth inning, in which he temporarily stalled the Atlanta lineup by sitting down all three batters. The momentum didn’t carry though, and he recorded just three strikeouts on 92 pitches. Urias was visibly dejected walking off the mound after letting up another run in the fifth.

Normally good about keeping his composure, Urias did not hold back in showing frustration in his—and his teammates—performance. After missing his spot and letting up a home run to Freddie Freeman, Urias slapped his hand on the mound. Later that same inning, Urias flung his arms in the air after center fielder Gavin Lux let a ball drop in front of him that allowed another Atlanta base runner to score.

Los Angeles struggled offensively as well. Cody Bellinger’s Game 3 heroics did not continue into Game 4. Bellinger accounted for 1 of just 4 hits for the Dodgers, compared to the 12 hits the Braves produced. The top of the Dodgers’ lineup went 0-11 with a walk. Los Angeles remained hitless until the fifth when Justin Turner hit an opposite field single. But with Turner likely out on injury, Dodgers’ manager Dave Roberts said there are changes to be made to L.A.’s lineup.

Justin Turner Likely Out for Game 5

Dodgers’ third baseman Justin Turner injured his hamstring after limping off the field in the seventh inning. Turner hit a ground ball up the middle, but did not make it to first base before stopping to grab his leg. The All-star third basemen left the game and did not return, and manager Dave Roberts discussed the extent of Turner’s injury during the postgame press conference.

Game 5 of the NLCS is scheduled for 8 p.m. E.T. Thursday at Dodger Stadium. A win for Atlanta would send them to their first World Series since 1999, and the potential to claim their first title since 1995. With a 3-1 lead in the series, history is on the Braves’ side. Of the 89 MLB teams who have ever faced a 3-1 deficit in a best-of-seven series, only 14 have come back to win. The exception, of course, being last year’s Dodgers squad who came back against Atlanta and took the series in Game 7.

Braves ace Max Fried will take the mound in Game 5, while the Dodgers will sift through the bullpen to try and save their season. Fried, a southern-California native, has the chance to send the Braves to the World Series in his hometown.

“What he’s done in the second half and pretty much over the whole course of the season, after the first couple weeks, every time you see No. 54 on that mound you got a real good feeling,” Freeman said.