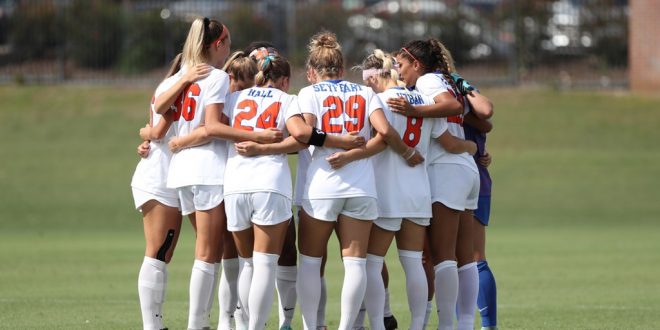 Last night in Georgia, the Gators persevered through a three-goal deficit when they tied the game up 3-3 in the second half in a 12 minute period. Despite the comeback, Georgia shot a game-winning goal with just 5 minutes left on the clock to settle the score at 4-3.

The Gators overcame a three-goal deficit in fast fashion when they scored three goals in under twelve minutes. To kick off the scoring, Kouri Peace assisted Madison Alexander to a successful shot down the center. Then, Freshman Riley Thompson was able to make her first goal of the season at 61:58.

A red card given to Georgia’s Cecily Stoute resulted in a free-kick shot in by Nicole Vernis 19 yards off the net to tie up the match. Although, the Gator scoring streak came to an end when Georgia took the lead at 84:12 with a goal from Mollie Belisle.

At the top of the leaderboard this season is Kit Loferski who has put 8 points and 4 goals and 18 shots on the board. Nicole Vernis has registered 18 shots with 9 on the goal. In addition, Cece Price has given her teammates 2 assists this season.

The Florida Gators are back in the Swamp this Sunday to host LSU to close the regular season. Florida will celebrate Gator Senior Day with the match beginning at noon at Donald R. Dizney Stadium.

Parker Welch is a Senior at the University of Florida majoring in Sports Media at the College of Journalism & Communications.
@parkerrwelch
Previous Heat blow out Bucks, 137-95
Next NLCS Game 5 Recap