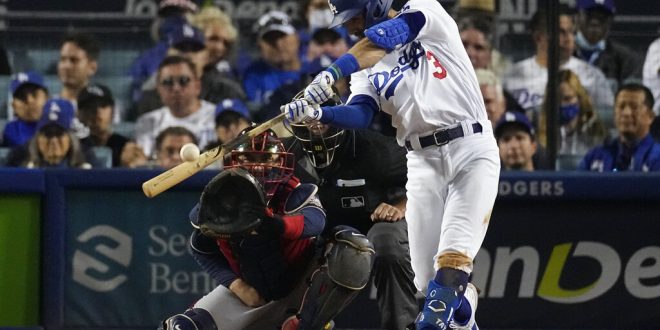 The Los Angeles Dodgers kept their season alive with an 11-2 drumming of the Atlanta Braves in last night’s NLCS Game 5. The series now shifts back to Atlanta for games six and seven with the Braves holding a 3-2 series lead.

After winning game four in decisive fashion, the Braves led the series 3-1 and looked poised to clinch the series in game five. The Braves threw lefty ace Max Fried while the Dodgers started Joe Kelly in a bullpen game. This made it look even more promising for the Braves to clinch.

In addition, Jorge Soler returned to the Braves after receiving a positive test for COVID-19 last week. Soler had been a huge bat for the Braves down the stretch for the season and in the NLDS. Even without him, the Braves had cruised through the series so far.

The Dodgers were also now without Justin Turner, who strained his hamstring in game four and has now been ruled out for the remainder of the postseason. Chris Taylor started at third base in Turner’s place.

In the first inning, it looked as if this game would be a repeat of last night. Freddie Freeman got a hold of a 2-0 breaking ball from Joe Kelly and sent it to the seats in right-center for a two-run home run.

It did not take long for the Dodgers to respond. In the bottom of the second, AJ Pollock crushed a solo home run to left field to open the scoring for the Dodgers. This was followed by an Albert Pujols single and then a two-run shot by Chris Taylor.

Taylor was at it again in the bottom of the third. He hit a single up the middle to drive in AJ Pollock and give the Dodgers a 4-2 lead and Taylor his third RBI of the game. The game remained 4-2 Dodgers through the fourth inning.

That would not be the end of the night’s work for Taylor. In the bottom of the fifth, Taylor connected with a Chris Martin fastball and sent it to centerfield for another two-run home run, making it 6-2 Dodgers. Taylor was now up to five RBIs in the game.

AND HE'LL DO IT AGAIN. pic.twitter.com/knMCY31tMY

With that home run, Taylor joined Johnny Damon as the only players to have hit two home runs and five RBIs in an LCS or World Series elimination game. But still, his night was not over. In the bottom of the seventh, Taylor hit his third home run of the game. This time, off lefthander Dylan Lee. This made it six RBIs for Taylor and the first three-homer game of his career.

A TAYLOR-MADE GAME FOR CHRIS. pic.twitter.com/sNc1K9HVOy

That home run set several postseason records. First, Taylor joined the short list of players who have hit three home runs in a postseason game. Taylor was also the first to hit three in an elimination game. He also tallied 13 total bases on the night, also the most ever in an elimination game. Taylor had made for himself what will be one of the most unforgettable nights of his career.

The Dodgers were not finished scoring, however. In the bottom of the eighth, Trea Turner singled to left to drive in Mookie Betts to make it 8-2. After Corey Seager reached on a single, AJ Pollock went deep again for a three-run home run and his second long-ball of the game. This pushed the score out to 11-2 and that would be the final score.

The win draws the series to 3-2 with Atlanta leading. But with the series heading back to Atlanta, the Dodgers still have a lot of work to do if they want to complete the comeback. Game six will be on Saturday at 5:08 PM ET. Max Scherzer has been announced as the starting pitcher for the Dodgers against Ian Anderson for the Braves.

Jack Shivertaker is a senior at the University of Florida pursuing a degree in Journalism with a focus on sports media.
@JackShivertaker
Previous Florida Soccer Falls 4-3 To Georgia
Next Phlandrous Fleming Jr. Excited to Help the Gators Win