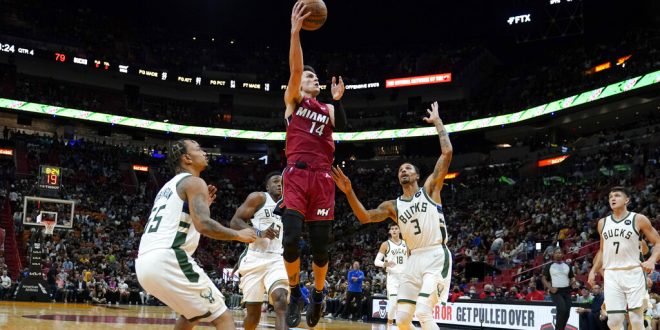 While the Milwaukee Bucks opened their season already with a win over the Brooklyn Nets, they traveled to South Beach to take part in Miami’s opening game of the season. The Heat, after suffering a sweep at the hands of Giannis Antetokounmpo and the Bucks in the first round of last years NBA Playoffs, had a chip on their shoulder.

That chip led to a dominance over the Bucks that included three Heat players scoring over 20. Miami beat Milwaukee by a score of 137-95.

Coach Bud: "We got our butts kicked tonight — it happens in the NBA." #FearTheDeer pic.twitter.com/xAGbioVTS6

Firing out of the gate

Because it was Miami’s first game and Milwaukee’s second, one would expect the Bucks to enter the game in more of a rhythm than Jimmy Butler’s squad. The opposite happened; Miami steamrolled to a 40-17 lead after the first quarter. Tyler Herro was firing on all cylinders, making a statement game after fans criticized his performance last season; he would finish as Miami’s leading scorer with 27 points. Not only was the offense on fire, the team did an excellent job of keeping Antetokounmpo in check. The Greek superstar was just 4 for 11 in field goals, and had a plus-minus of -25.

Tyler Herro speaks after dropping a Game High 27 points in the Heat's victory!

The game was nearly over after the first quarter. The Bucks clawed their way back in the second quarter to a less lopsided period, but the Heat still outscored them by six. As the teams entered the locker room for halftime, Miami was already leading by 29 with a 72-43 score.

Heat cruise to the finish line

After the first-quarter explosion, there was not much left to do for Miami. Bam Adebayo continued to limit Antetokounmpo’s abilities, but he also found himself on the offensive side of the ball. The center ended the game with 20 points and 13 rebounds. Despite the lead, Miami kept its’ foot on the gas pedal, outscoring the Bucks in both of the last two quarters by a score of 65-52.

After a disappointing year for the Heat after making it to the NBA Finals in the 2020 postseason, this year will be a tester for Miami in whether or not the core of Butler, Adebayo and Herro can return to its status as a contender. Even with newcomer Kyle Lowry playing poorly on offense, the team was able to suffocate the reigning champs; that is a good sign.

Miami will travel to Indiana for a Saturday night matchup with Caris Levert and the Pacers. For the Bucks, they will continue their road trip with a stop in San Antonio for a game with the Spurs on Saturday, as well.

Carson Cashion is a second-year student at the University of Florida, and has a major in journalism with a specialization in sports and media. Originally from the Orlando area, Cashion has covered the UF Gymnastics team as well as Oak Hall athletics for ESPN Gainesville.
Previous Oak Hall Girls Volleyball Wins District Championship
Next Florida Soccer Falls 4-3 To Georgia