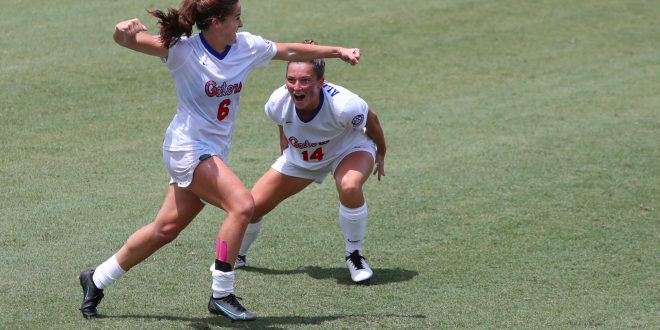 Sunday, Gator soccer earned three valuable points when they dominated SEC rival LSU 4-0 at Donald R. Dizney Stadium, in Gainesville, Florida. This game was the Gators senior day and their highest scoring game of the season.

In the win, the Gators earned three points in SEC conference play. They entered Sunday in a three-way tie for 10th. Any points will help the Gators as they look to advance into the SEC Tournament held from Oct. 31 to Nov. 7 in Orange Beach, Ala.

UF’s opening goal was the product of a senior connection between Kit Loferski and Madison Alexander. Loferski lofted the ball for a cross, and although LSU goalie Mollee Swift got her hands on the ball, she could not hold on and Alexander finished the cross in the 14th minute.

This marked the second game in a row Alexander opened the Gators scoring. Just before the half concluded sophomore forward Maddy Rhoades picked up a yellow card in the 44th minute.

The Gators went into the half up 1-0.

Gator soccer in the second half

In the second half the Gators scored again in the 54th minute to open up an 18 minute scoring span. Alivia Gonzalez scored at the 54:17 minute mark when Loferski set her up with an assist just outside the box. This was Gonzalez’s second goal of the season.

The Gators third goal would come in the 62nd minute off a corner kick. Sophomore Sydney Urban sent the ball to the top of the box to set up Freshman Madison Young for a header marking Young’s first career goal. The final goal came after Junior forward Kouri Pierce was fouled in the box and Loferski took the penalty kick. She put the ball away for the Gators’ fourth and final goal of the day in the 72nd minute. Loferski is the gators leader in goals (5), assists(3) and points(13).

The Gator soccer team will conclude their regular season play on Oct. 28 in a home matchup with the South Carolina Gamecocks. 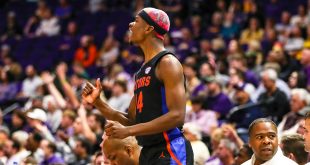