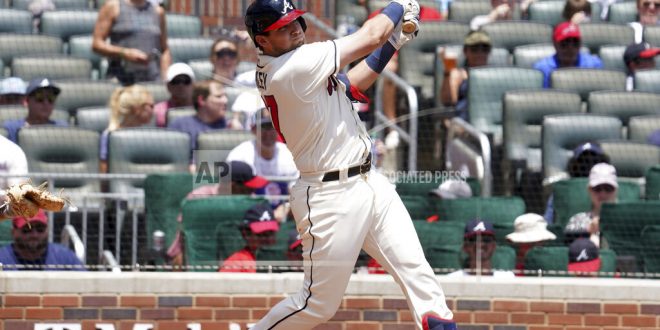 Atlanta Braves' Austin Riley watches his two-run home run against the Pittsburgh Pirates' in the third inning of a baseball game Sunday, May 23, 2021 in Atlanta. (AP Photo/Tami Chappel)

The Atlanta Braves look to defeat the Houston Astros in Houston tonight in game six of the 2021 World Series.

The Braves lead the Astros three games to one and are coming off of a 9-5 loss at home in game five.

Astro’s manager, Dusty Baker, discussed the importance of scoring runs in the early innings that could carry the momentum throughout the game.

In the game two 7-2 win, the Astros scored four runs in the second inning. Meanwhile, in game five in Atlanta, the Astros came back from being down 4-0 in the first inning to take the series back to Houston.

As the series travels to H-Town, the Braves know that it is going to be an electric atmosphere. Atlanta Braves manager, Brian Snitker, shared the team’s comfortability playing at Minute Maid Park.

On the other hand, Baker shared the excitement bout what it means to possibly win in game six at home to push the series to a game seven.

Ahead of game six, Baker announced that right-hand pitcher Luis Garcia will be starting on the mound. In game three, Garcia pitched 3.2 innings and struck out six batters.

Garcia previewed his game-six start by talking about his confidence in his game.

Fried talked about his motivation to redeem himself following his World Series outing earlier.

Fried discussed his mindset heading into the match-up tonight.

The California native went on to discuss the strength of the Houston Astros and how important it is to finish the job tonight.

The Braves hope to bring the championship trophy back to Atlanta tonight after not winning a World Series in over two decades.