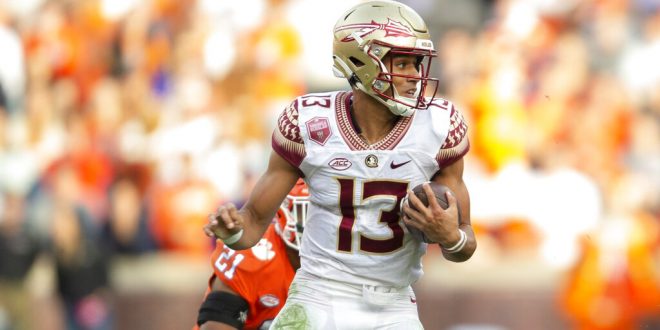 Florida State (3-5, 2-3) returns home to face North Carolina State (6-2, 3-1) this Saturday at 4 p.m. in Doak Campbell Stadium. The Seminoles look to win their fourth game of the season.

The Seminoles had their three-game winning streak broken in a 30-20 loss to Clemson on Oct. 30. This week, the team will look to bounce back against the Wolfpack, who defeated them last year 38-22 in NC State.

In last week’s matchup, Seminoles redshirt sophomore quarterback Jordan Travis threw for 176 yards on 14-of-22 passing for two touchdowns against the Tigers. Unfortunately, he was also sacked six times. The rushing attack could only produce 65 yards on the ground and averaged 1.9 yards per carry.

You GOTTA see this #SCTop10pic.twitter.com/TfX7Z6jS48

Travis should look to have a balanced offensive attack against the NC State defense. Finding open receivers and finding ways to develop the run are key. He should also try to return to running the ball. He had run for over 100 yards in their three-game win streak before Clemson held him for -4 yards rushing last week.

Florida State has a lot on the line for the remainder of the season as they will need to win three of their next four games (NC State, Miami, Boston College, and Florida) to qualify for a bowl game at the end of the season.

NC State is ranked second in the ACC behind Wake Forest, with a chance to win the Atlantic Division this season. The Wolfpack has a game at Wake Forest on Nov. 13, but first, they must defeat the Seminoles to have a chance at being ranked number one in the ACC.

Wolfpack sophomore quarterback Devin Leary threw for 317 yards and four touchdowns on 25-of-36 passing last Saturday in a 20-14 win over Louisville. Leary has 21 touchdowns and only two interceptions this season.

On Saturday, Leary should look to continue passing the ball to his wide receivers. He has thrown for over 200 plus passing yards in each game this season. He should also look to involve the running game. They have run for over 100 yards in six of their last eight games this year and scored 10 touchdowns on the ground.

NC State defense should be dominant against the Florida State offense. They are ranked six in the FBS in scoring defense. Their defense has only allowed one rushing touchdown this season against Clemson. The Wolfpack was also ranked No. 19 in the College Football Playoff rankings on Tuesday.

NC State has won three of the four last meetings against the Seminoles. On Saturday, we will see who comes out on top as the Wolfpack tries to win the ACC division and the Seminoles look to try to remain eligible for a bowl game this season.