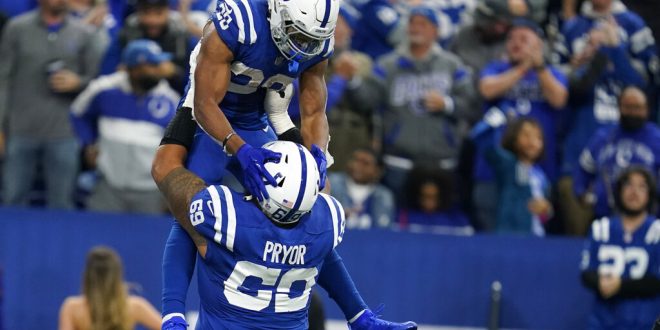 Indianapolis Colts' Jonathan Taylor (28) celebrates running for a touchdown with Matt Pryor (69) during the second half of an NFL football game against the New York Jets, Thursday, Nov. 4, 2021, in Indianapolis. (AP Photo/Michael Conroy)

After a heartbreaking loss to the Tennessee Titans last Sunday, the Indianapolis Colts had an ideal matchup to bounce back from the loss with…the New York Jets. Rookie quarterback Zach Wilson suffered a knee injury earlier this year, and backup quarterback Mike White has led the team ever since. That is, until, the second-string quarterback also got hurt, this time a wrist injury, so third-stringer Josh Johnson took over.

In a game that teetered on the brink of a blowout, the Jets managed to make it competitive until the last drive. Still, the running attack of Indianapolis was too much for the Gang Green, as the Colts won 45-30.

Colts running back Nyheim Hines would open up the scoring, breaking free for a 34-yard touchdown on the ground. The Jets had an answer though, as White would find Elijah Moore for a 19-yard touchdown; the wide receiver would finish the game with 84 yards and two touchdowns. Shortly after, though, White would head to the bench and Johnson would assume the helm of starting quarterback. After one quarter, New York was hanging around in a 7-7 game.

The Jets run defense is not one of their strong suits, and that was made clear as the game progressed. The second quarter was blue-coated, as Indianapolis could seemingly draw up any rushing play and earn at least five or six yards. Colts running back Jonathan Taylor would open the second quarter with a 21-yard touchdown run, and quarterback Carson Wentz would find tight end Jack Doyle for a touchdown pass just minutes later. Johnson was able to drive the Jets down to earn a field goal, but a last-minute touchdown toss from Wentz to wide receiver Michael Pittman Jr. pushed the lead to 18 entering halftime. With the Colts receiving the second-half kickoff, New York was sitting between a rock and a hard place.

The two opening touchdowns of the second half were from the Colts, pushing the score to 42-10 at one point. Indy center Danny Pinter caught a two yard throw from Wentz for the first one, and Taylor broke free once again for a massive 78-yard touchdown sprint. The running back would finish the game with 19 carries, 172 yards and two touchdowns. Averaging over nine yards a carry, Taylor was simply unstoppable.

Once trailing by 32, the Jets found a second wind. Johnson marched his team down the field, finding Moore for a touchdown. Then, New York opened the fourth quarter with another passing touchdown from Johnson, this time to Ryan Griffin. Indianapolis responded with a field goal, but Johnson once again pulled the Jets closer, finding Ty Johnson for the quarterback’s third touchdown pass. New York was driving late, trying to pull within one possession, when disaster struck; inside the red zone, Johnson threw his first interception of the day. A deflected pass found a Colts defender, and that would ice the game. Colts win, 45-30.

The Colts will have another favorable matchup next week, when they face the Jacksonville Jaguars in Indianapolis. For the Jets, the road just gets tougher; Josh Allen and the 5-2 Buffalo Bills will come to town next week.

Carson Cashion is a second-year student at the University of Florida, and has a major in journalism with a specialization in sports and media. Originally from the Orlando area, Cashion has covered the UF Gymnastics team as well as Oak Hall athletics for ESPN Gainesville.
Previous FEATURE: Gainesville High Senior Ryan Nolan
Next Ceasar, Monserez Make History in Gators Top-25 Volleyball Win