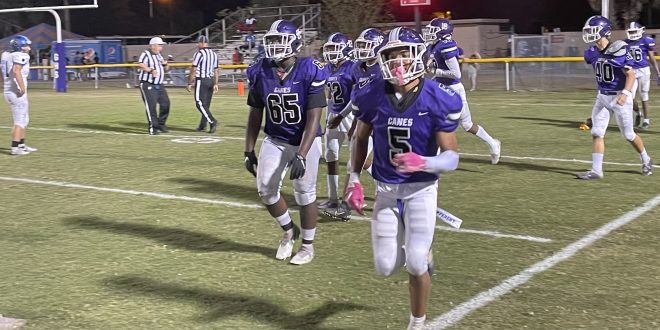 Ryan Nolan, a senior at Gainesville High Scholl, is currently committed to play football at Army West Point who are an NCAA Division I football team. The reason he chose Army was very telling of how mature he is and he shared his plans for when he is done playing football.

Nolan is one of the leaders for this Hurricanes team. Growing up he said he played multiple sports including football, basketball, and track & field. However, he fell in love with football and stuck with it because of the physicality that was allowed in the game. This is not surprising as you can definitely see this physicality he play with on the field.

WHAT. A. TRUCK. Ryan Nolan with an emphatic truck to get into the endzone on 3rd down.

No matter who you are focusing on, you will see Nolan running until the whistle is blown.

When asked to describe himself, Nolan said he is a hard worker, a leader, and overall, a good teammate. All of these qualities are easily seen when watching Hurricanes’ games. Whether it is providing verbal leadership or leading by example on the field, he shows just how important he is to this team.

How hard of a worker is he? For this Hurricanes team, Ryan plays all around the field. He has taken snaps as a wide receiver, in shotgun as a wildcat quarterback, and he even plays on the defensive side of the ball as a safety. Nolan has shown just how far he’s willing to go for his team. He, truly, is a game-changer for this Hurricanes team. However, playing on both sides of the ball is nothing new for him.

What this Season Means For Nolan and His Teammates

This Hurricanes team may not have been a powerhouse as in recent seasons. The losses they’ve had in the previous three years might have made some think negatively about the Hurricanes coming into this season. Contrary to this belief, this Hurricanes team has proved all the doubters and nay-sayers wrong. And despite Ryan Nolan not being at Gainesville all four years, this season is one of his best memories. He still knows how much it means to his teammates.