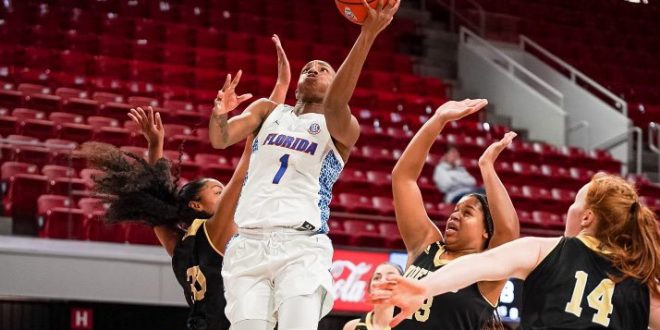 The Florida women’s basketball team (2-2) gets back to the .500 mark on the season by beating the Wofford Terriers (0-4), 61-47  to end their play in the preseason WNIT Classic.

Leading the way for the Gators was veteran Kiara Smith  with a team high in points and rebounds. The 5’10” guard scored 13 points to add to her seven rebounds on the evening. Smith also made her presence felt on the defensive end with an impressive six steals.

The defense was the story all evening for the Gators. From behind the arc, Florida allowed one made field goal. Although, Florida didn’t shoot well from three themselves, they did force 20 Terriers turnovers. Head coach Kelly Rae Finley and the Gators led as many as 20 points as they cruised to their first win of the tournament.

Florida came off being dominated from start to finish against the fifth ranked NC State Wolfpacks, 85-52. First quarter struggles continued for the Gators  as they were not able to dig themselves out of a 14-point hole as they faced their first ranked opponent of the year. The Wolfpack ended the quarter on a 14-1 run.

Entering Monday’s matchup, Gators were outscored 66-35 in the first quarter for the tournament. However, after a made free throw to give the Terriers an early 1-0 lead, a Lavender Briggs jumper with 8:14 left in the first gave the Gators the nod moving forward. After that, Florida never looked back as they controlled the tempo for the remainder of the game.

Briggs, shot a perfect 3-3 from the field to give the Gators the early 18-9 lead heading into the second quarter.

The Gators are in control after one! #GoGators pic.twitter.com/uNPdvbZ3sc

Gators Turns on the Pressure

In the second quarter, Florida continued its dominant performance on the defensive end, forcing nine turnovers.  Also, an Alberte Rimdal three put the Gators up 27-13 with 4:33 left before the half and the Gators extended that lead at halftime to 33-23.

In the third quarter, Florida’s full court pressure started to wear heavily on the Terriers offense. Florida held them to a season low 12 percent shooting in the period, only scoring four points. Florida opened the quarter on a 10-2 run to give them a 43-25 lead heading into the fourth.

In the final period, Wofford continued to show some fight cutting down the lead to as low as 12. However, it was a little too late for the Terriers as the Gators held onto to their lead for the win.

Monday’s 14-point victory gives newly appointed interim head coach Kelly Rae Finley her second victory of the year. Finley and the Gators also get their second victory in double-digits after beating Georgia State, 84-70, in their home opener. Now, Florida looks to find some consistent momentum heading back to Gainesville.

After an overall 1-2 record in the tournament, Florida heads back to the O’Connell Center to face Grambling State on Friday. Moving forward, the Gators have two consecutive games at home before they ship out to Puerto Rico for the San Juan Shootout on Thanksgiving weekend.

Tip off against Grambling State begins at 6 p.m. Friday, November 19.