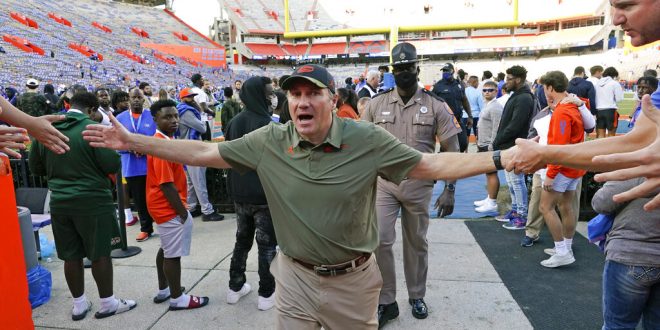 The Florida Gators have disappointed many as they are 5-5 on the backend of their season. Looking forward to the future, Blake Alderman joined Sport Scene with Steve Russel to talk about why the Gators have struggled with recruiting and there might not be a whole lot to look forward to.

While there has been some struggles in recruiting in the near future, Nick Evers is a bright spot for Florida’s future. Evers is a four star recruit from Flower Mound, Texas and committed in to the University of Florida in March. He plans on coming to visit for Florida’s last regular season game when the Gators host Florida State.

On the other hand, players will start their official visits in December, including five star safety Jacoby Matthews. However, Alderman warns Gator fans to not be too hopeful with top tier recruits. Alderman said a lot of it has to do with the staff. Mullen his team has never been known as great recruiters and they have largely relied on their development of players to draw athletes in.

However, now that they have fell short of the expectations for this year, there is not much to back up their talk. Alderman said the only thing that seems to be improving is the facilities, but facilities alone will not be the deciding factor for players when looking at schools.

June is popular month for players to visit schools and Alderman stated that Florida coaches chose to take off the last week in June instead of hosting athletes. This lackadaisical approach has led to their below average year in recruiting. Alderman suggested that the Gators would have more success if they were more aggressive in the recruiting process. Florida is usually among the top 10-12 recruiting programs, but without a strong season they have lacked this year.

Alderman relayed that recruiting can’t be taught, it is just something you do. Relating and connecting to kids is a key factor and it seems like the Florida coaches have not been known for it.