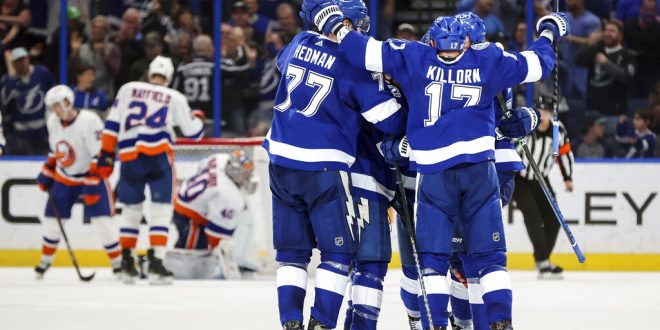 The back-to-back Stanley Cup champions have caught lightening in a bottle over the last three weeks.

After starting the season 2-2-2, the Tampa Bay Lightning have won six of their last eight games surging to an impressive 8-3-3 record.  Last night, they comfortably defeated the New York Islanders by a score of 4-1.

A look at the final stats in the @TBLightning win! #GoBolts pic.twitter.com/Kmas3RWBcq

It was the two teams first matchup since the Lightning emerged victorious in 2021’s Game 7 of the Eastern Conference semifinals.

Historically, the Lightning and Islanders organizations have no bad blood.  The same can not be said for many of their players.

Right after the opening puck drop, New York defensemen Zdeno Chara and Lightning Forward Pat Maroon dropped the gloves and fought.  The two have fought many times before and have a history dating back to Chara’s time on the Bruins and Maroon’s time on the Blues and Ducks.

Even at age 44, Chara emerged victorious eventually dragging Maroon down to the ice.

His altercations for the night were not over.  Late during the 3rd period, Chara hit Islander’s forward Boris Katchouk with a high-sticking.  The two then proceed to engage in a skirmish that earned them both-10 minute game misconducts.

Ultimately, Chara wasn’t the only one inciting violence.  During the games 2nd period, the Lightning’s Anthony Cirelli and Islander’s Brock Nelson took part in an exchange that left both men in the penalty box.  Nelson tripped Alex Killorn and then Cirelli stepped in to defend his teammate.  After the fight, Nelson was charged with a penalty for tripping and fighting, while Cirelli was charged with penalties for instigating and fighting, which lead to a game misconduct.

Both the Lightning and Islanders are fiery and competitive teams.  There’s a decent chance the beef between the two organizations continues during the regular season, and extends into the playoffs.

During their recent stretch of success, the Lightning have got back to their old ways.  Scoring goals while not allowing their opponents to do the same.  Over their last eight games, the Lightning have conceded more than two goals only once.  Their goalie, Andrei Vasilevskiy, has risen to the occasion and greatly improved his play.

In addition to the defense, the Tampa Bay offense has also got back on track as of late.  Most importantly, many of their key offensive weapons have started to return from injury.  Steven Stamkos is back in the lineup and he made his presence felt against the Islanders last night.  The Tampa Bay captain scored a late 3rd period goal that sealed the deal.

The Lightning and Islanders are next set to clash on March 27th.  The opening face-off is set for 2 p.m.

William Silverman is a junior at the University of Florida from Philadelphia who is interested in pursuing a career in business, communications and journalism.
Previous Heat Take Down Thunder 103-90
Next Atlanta Hawks Beat Orlando Magic 129-111