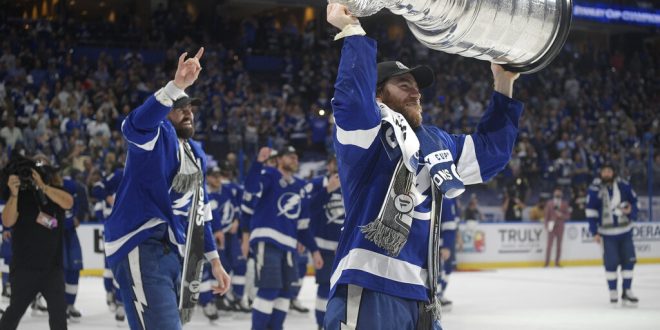 The joke that’s been going around since the night of July 7 is “Lightning struck twice.” Cheesy? Sure. But after the Tampa Bay Lightning won the Stanley Cup for the second-straight year, many saw this as the only joke that is relevant to make.

It took five games to defeat the Montreal Canadiens. The final score in the clinching game: 1-0.

Goalie Andrei Vasilevskiy picked up yet another series clinching shutout. Last year, game six against Dallas got him his first-ever playoffs shutout. This season, he had five. On top of that, he finished the playoffs with a 1.90 GAA and a ridiculous .937 save percentage. The hockey world recognized this insane performance by awarding him the Conn Smythe Award–the playoff MVP.

Vasy admitted he was surprised he won the Smythe.

The captain of the Lightning, Steven Stamkos, said this run is special. We’re paraphrasing the cleaner version of this.

The questions were there at the beginning of the year. Could the Lightning go back to back? Could they do it outside the bubble?

By the end of the 56-game, realigned year, there were some doubts. The Bolts sunk to third place in the Central Division, including two very rough performances against the Florida Panthers in the final two games of the season. Suddenly, the Panthers looked like they’d take the Bolts out in the first round. That didn’t happen. Bolts took it in six.

They then beat the Carolina Hurricanes in five to be the champs of the Central.

The New York Islanders were out for blood in their rematch in Semifinals. The Lightning were without a doubt given a run for their money. The series went to seven, and when they got beat, they got beat.

But the Lightning prevailed, and they were able to coast to another Cup in the Finals.

Never say never. But the answer is probably yes. Championships are difficult to achieve, let alone back to back. There’s also the issue of the salary cap. Bolts head coach Jon Cooper assured the core would be back next season.

But he also recognized the entire team can’t stay together forever.

Regardless of how far the Bolts are over it, they still have to get back under it for next season. In an effort to protect as much of the core as possible, some of the supporting cast will have to go.

This is simply a reality. So, to all the Tampa Bay Lightning fan out there, soak up what as been witnessed in the last two seasons. It’s been a run for this group.

Harrison is a sports coordinator at ESPN 98.1 FM/850 AM WRUF. He served as a beat writer for Florida Gators football for the 2019 and 2020 seasons. He also contributes to WRUF's Gainesville Sports Center segments and makes appearances on the Clash on Harp on Sports. Harrison has been a content writer for WRUF since January 2019 as well.
@HarrisonSmaj
Previous Colin Castleton announces return to Gators Basketball
Next Florida Men’s and Women’s Basketball Teams Set to Participate in Inaugural Jumpman Invitational