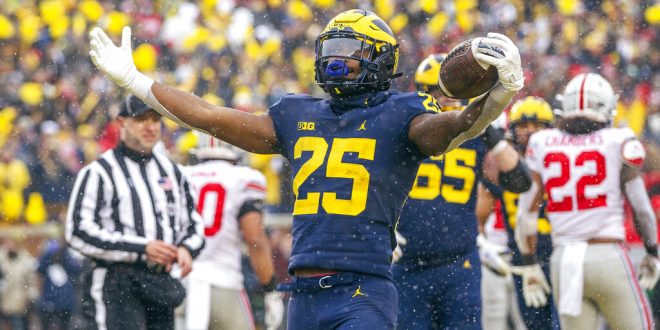 Week 13 of 15 of college football was nothing short of exciting. Among some of this excitement is Michigan beating Ohio State for the first time since 2011, bringing them to their first Big Ten Championship, as well as Auburn taking Alabama to quadruple overtimes before the Crimson Tide could take the win.

The first overtime game in the history of the Iron Bowl took place on Saturday night. The Auburn Tigers shut out the Alabama Crimson Tide for the first three quarters- something that had not happened in five years. Auburn did this with their backup quarterback, T.J. Finley as their starter, Bo Nix, is suffering an ankle injury. Finley found Kobe Hudson for a 15-yard touchdown pass. This was the only touchdown in the first 45 minutes of game action. Alabama’s leading receiver, Jameson Williams, was ejected from the game for targeting while on punt coverage. This was in the second quarter right before Auburn scored their first touchdown.

In the fourth quarter, Alabama came back after trailing 0-10 with a 12-play, 97-yard touchdown drive to tie the game. Alabama’s wide receiver, John Metchie III, scored the game-winning 2-point conversion to defeat Auburn in the fourth overtime period. Alabama won in a final score of 24-22.

No.5 Michigan Knocks off No.2 Ohio State

Michigan keeps its College Football Playoff hopes alive after defeating the second-ranked Ohio State Buckeyes. The Wolverines won the Big Ten East and will play in the Big Ten Championship game for the first time ever. Michigan had a dominant rushing attack and a defensive line that applied an immense amount of pressure on Ohio State. Michigan running back Hassan Haskins rushed for 169 yards and five touchdowns. Defensive end Aidan Hutchinson had three sacks on Saturday to set a school record of 13 for the season.

Michigan entered halftime with a lead of 14-13. Ohio State punted on its’ first two drives, the second ended with a sack from Hutchinson as Michigan’s lead grew to 15 points. The game was called when Ohio State had a turnover with a minute remaining in the game. The hopeful Michigan team won in a final score of 42-27; their first win over Ohio State since 2011. Additionally, this was also head coach Jim Harbaugh’s first win over Ohio State.

Previous Pat Dooley’s ‘Back 9’ Nov 29th
Next Florida Moves Up Nine Spots to No. 14 in AP Poll