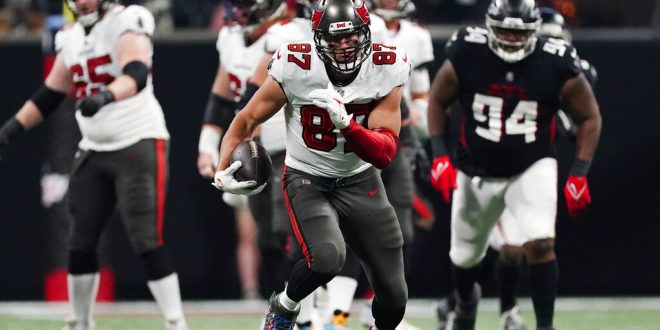 The Tampa Bay Buccaneers swept the Atlanta Falcons 30-17 Sunday and moved up to a 9-3 record.

Running back Leonard Fournette secured the ball with a sleek one-handed catch to give the Bucs a six-point lead two minutes into the first quarter; this was just the beginning.

Brady didn’t hesitate to throw the ball in the second possession. He threw a 30-yard pass to Godwin, a 46-yard pass to Evans and a 13-yard pass to tight end Cameron Brate in the endzone. Bucs were up 13-7.

Gronkowski made his second appearance in the end zone with a 19-yard touchdown thirty seconds left in the third. No real action occurred in the fourth until a Bucs field goal by kicker Ryan Succop with a minute remaining in regulation.

Throughout the game, Brady threw 368 yards for a 74.5% completion rate. Wide receiver Chris Godwin led the team with 15 passes and 143 passing yards though did not snag a touchdown.

“Tom knows what he’s thinking before he does,” coach Bruce Arians said.

“Tom threw a couple of balls before Gronk was ready because he knew where he was going. There’s great chemistry out there.”

Tight end Rob Gronkowski clutched a touchdown with a 17-yard ball run straight into the endzone to carry the score 19-10. With the two-minute clock winding down and a failed Falcons conversion, the Bucs took possession. Confident and ahead of the game, Tampa was tripped up by a fiery Falcons defense.

Falcons on the offense

The Falcons came out of the gate with a 39-yard rush by utility player Cordarrelle Patterson, who rushed for 78 yards in the game. Running back Mike Davis dodged Tampa’s defense as he slipped through an opening to score a touchdown nine minutes into the first quarter. He put up 32 rushing yards and 37 receiving yards.

Atlanta rounded out the first half with a last-minute pick-six by defensive tackle Marlon Davidson and was once again down by three. They did not score in the second half.

Bucs defense sacked quarterback Matt Ryan to wind down the first quarter. It was the first of five sacks for Ryan.

Ryan fumbled the snap with a second and goal eight minutes into the second quarter; just one of three fumbles he built up. With a missed catch to Patterson, Ryan and the Falcons had no choice but to force a field goal and bring the score deficit to three.

Tampa cornerback Pierre Desir knocked the ball out of wide receiver Russell Gage’s hand, forcing a fumble recovered by cornerback Carlton Davis. It was Gage’s first fumble of the season and the second in his professional career.

"The offensive line [has] had a great season."

The Buccaneers will face the Buffalo Bills Sunday at 4:25 p.m. while the Falcons take on the Carolina Panthers Sunday at 1 p.m.

Previous Pat Dooley’s ‘Back 9’ Dec 6th
Next Who will be at the top of the AFC East after MNF?