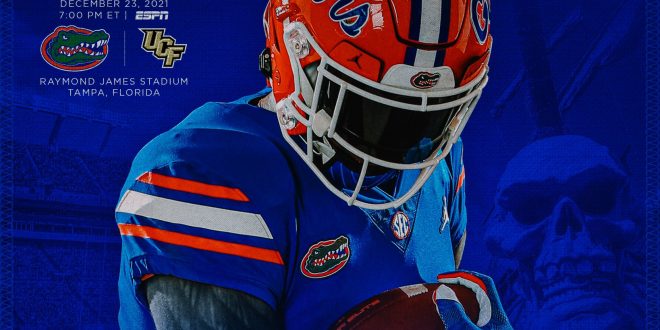 Under head coach Dan Mullen, Florida compiled six conference losses in 2021 — the most in over 40 years. Despite the lackluster season and Mullen’s firing, the Gators rallied under interim head coach Greg Knox and defeated Florida State in their final game to clinch bowl eligibility and a trip to the Gasparilla Bowl.

All but one of Florida’s four non-conference victories this year came against in-state opponents. In week two, the Gators trounced USF at Tampa’s Raymond James Stadium, where Florida will return on Dec. 23 to take on the UCF Knights in the Union Home Mortgage Gasparilla Bowl.

UCF finished 8-4 overall and 5-3 in the American Athletic Conference — tied for third place behind only No. 4 Cincinnati and No. 20 Houston. The Knights went undefeated at home but struggled with a 1-4 away record. The only common opponent between the Gators and Knights this season was USF. Florida beat the Bulls by 22 on the road, while UCF prevailed by only four points at home.

This will mark Florida’s third time facing UCF in program history; the Gators won 58-27 in 1999 and shut out the Knights 42-0 in 2006. On paper, Florida and UCF’s points scored and points allowed are nearly identical. The Gators average roughly 50 yards more through the air than the Knights, but both rushing offenses rank inside the nation’s top-35. Defensively, each team allows just over 200 yards passing and 150 yards rushing.

Two particularly explosive UCF players to watch for are wideouts, Ryan O’Keefe and Brandon Johnson. O’Keefe leads the Knights with 727 receiving yards and Johnson leads the team with 11 touchdown receptions. On the ground, running backs Johnny Richardson and Isaiah Bowser combined for over 1,500 all-purpose yards and 11 touchdowns.

UCF is especially strong in the trenches as its entire starting offensive line earned All-AAC Team honors this year.

It starts with the dudes up front ✊ pic.twitter.com/tBKd9iRjz1

On the flip side of the ball, six different UCF players including four defensive backs earned all-conference recognition. The Knights racked up 11 interceptions this season, which does not bode well for Florida quarterback Emory Jones, who led the SEC with 13 picks. Nonetheless, Florida’s prolific rushing attack should be able to move the ball against a defense that surrendered over 40 points to Louisville, Cincinnati and Houston.

Hello, I am currently a junior at UF studying sports media journalism with a concentration in Political Science. I contribute web and radio content weekly for WRUF ESPN Gainesville. Be sure to check out some of my recent articles!
Previous Who will be at the top of the AFC East after MNF?
Next Florida Looks To Rebound From First Loss