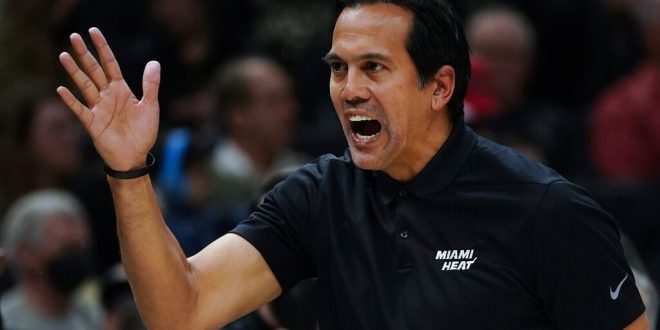 The Miami Heat have had their ups and downs this season 25 games in. After a 3-6 start, Miami has caught fire as of late winning six out of their last seven. After offseason acquisitions and a disappointing playoff series against the Bucks to end their season last year, Miami was eager to start the 2021-22 season. Almost a third of the way in, the Heat sit at 14-11 and first in the Southeast division.

Jimmy Butler leads Miami in points and steals, averaging 28.8 points and 2.2 steals. The all-star helped keep the Heat afloat after a slow start and is now helped out by right-hand man, Kyle Lowry.

Players have praised Lowry for the leadership that he carries on and off the court for the Raptors. The point guard brought his experience from Toronto and has helped the Heat this year, putting up 13 points a game.

After a disappointing sophomore year, Tyler Herro has reemerged and is a huge boost for Miami this year. Herro, a potential 6th man of the year, has exceeded expectations as he complements Lowry and Butler well.

Nobody can stay healthy. With players constantly going down, the Heat have struggled to find consistency in a starting lineup. Most recently,  Butler went down with a tailbone injury in Monday’s game. He was out earlier with a similar injury that had him sidelined for four games. Markeef Morris, Victor Oladipo, and Bam Adebayo have been out as well. Although facing adversity through injuries, the Heat have survived through 25 games.

Tyler Herro discusses Bam Adebayo's injury and how the Heat will have to continue to fight without him after the Heat's loss to Cleveland tonight@MiamiHEAT | #HEATCulture pic.twitter.com/f23RrWgrsw

On the court, Duncan Robinson has been a let down after signing a five-year, 90 million dollar deal in the offseason. After big contracts, players have taken steps back and the Heat hope he will be back on track soon.

Coach Spoelstra has taken the blame for a mediocre start, saying that he has to do a better job getting the team organized.

After an up and down start, the Heat will strive for consistency moving forward with the season.