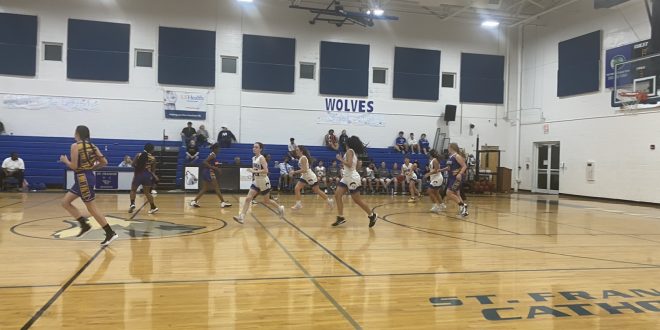 After starting out the season losing three games, the Saint Francis Catholic Academy Wolves traveled to Bell High School on Dec. 3 and came out with their first win of the season. The Wolves hoped to start a winning streak going into the game against the Union County Tigers on Monday, Dec. 6. Both teams fought tooth and nail in the second half to take the lead; however in the end the Wolves lost to the Tigers 36-31.

Slow Start in the First Half

At tipoff, you could tell that the game was going to be back and back forth. Both teams had a tough time talking and getting into position to make plays. The gym was silent except for Wolves head coach Scott McDaniel. He yelled every play that the girls should be running, told them where to stand once the ball was passed in and who they should be guarding.

Yelling out everything they were supposed to be doing, did not work well for the Wolves because the Tigers easily learned their plays and stole possession of the ball. While both teams got about the same amount of chances to score, they both kept missing the basket fully.

It was a low-scoring first quarter for both teams. Mallory Jablonski and Isabella Scarpatti helped put the Wolves on the board with two-point field goals. At the end of the first quarter, the Tigers held the lead by one point, 8-7.

The Wolves quickly laid on the pressure and their defense started to excel making the Tigers’ offense force turnovers in the second quarter. Making a fast break down the quarter, Lexi Bhatia goes for the three and misses, but teammate Wilnely De Los Santos gets the rebound and makes the layup, 9-11.

Key scorers for the Wolves in the second quarter were Jablonski and Bhatia. Jablonski tied up the game, 11-11, and this was the turning point for the Wolves’ offense. Anytime the offense got the ball, they relied on Bhatia to move the ball, make plays, or score. All night Bhatia tried to make three-pointers, but it wasn’t working out the way she wanted it. Finally from the corner, Bhatia took the shot and made it. She then made two more three-point field goals before the half ended.

Energy still up from the first half, the Bhatia and Avery Hasko are sinking threes left and right giving the Wolves a little more leverage.

The Wolves could have had a higher score throughout the game, but anytime they were at the line for foul shots they either missed all of them or made one. This is where the Tigers excelled. They were able to complete more of their free throws and make the score a bit closer, 28-25.

As the game started to wind down, the Tigers stepped on the gas and racked up the points to take the lead. However, Jablonski scored again to tie up the game, 29-29. The Wolves made a mistake by fouling the Tigers and allowing them the opportunity to make foul shots.

Tigers make both foul shots. With 2 minutes left in the half, the score is 34-29. pic.twitter.com/KYTqBgrKZO

Bhatia fouled on the way up for a basket gets the chance to make the Tigers 34-29 lead closer together. She made both shots and went into fight or flight mode on defense trying to make sure the Wolves did not give up any easy shots.

However, it did not work out for the Wolves and the Tigers won 36-31.

Catching Up with the Head Coach

Talking to the Tigers’ Head Coach Teyona Paige, she touched on how she felt about the win.

“It felt really good. Of course we had to make sure that we learn from pretty much everything that we did wrong in the first and second half. They were able to pull it together. I am very proud of each and every single one of them. they came out played their game and did their part.”