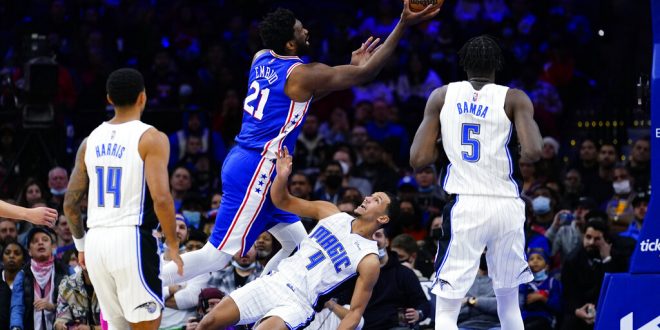 Philadelphia 76ers' Joel Embiid (21) drives to the basket over Orlando Magic's Jalen Suggs (4) during the second half of an NBA basketball game, Monday, Nov. 29, 2021, in Philadelphia. (AP Photo/Matt Slocum)

State of the Team

If your winning percentage would not even pass for a batting average, you know it has been a rough season. With a winning percentage of .200, the Magic are on pace to finish at 16-66, which would be the worst season in franchise history.

Orlando has picked up a couple big wins by defeating Utah and Denver. But that is far from enough to make up for the 20 losses suffered thus far, including going 0-5 against division opponents. Still, while the playoffs, and a winning record, seem a long way off, there is still plenty of time to turn things around. There are 57 games remaining in the season, and despite the dreadful start, the Magic are eight games behind the Hawks for the final play-in spot.

Is a playoff run likely for the Magic? Definitely not. The Magic, after all, is a rebuilding team right now. The team’s main goals right now are to develop the youth talent they have and acquire more in the upcoming draft. Even so, the players want to win. The fans want to see the team win. There is still time to turn things around. A run for the playoffs might be a stretch, but they can at least build some winning momentum to carry the team into next season.

So far, the centerpiece of the Magic’s roster is rising star Cole Anthony. The 21-year-old point guard out of North Carolina leads the team in points scored and assists and looks promising to be the future face of the franchise.

Another name to keep an eye on is Franz Wagner, the Magic’s first-round pick in the 2021 NBA draft. In his rookie season, Wagner has averaged 13.6 points per game, second on the team after Anthony. He is also one of the better three-point shooters on the team, making 36.5% of his shots from behind the arc. R.J. Hampton is another player that can go into this category. The 20-year-old was drafted in 2020 and has also shown promise, despite seeing less playing time than Anthony or Wagner. Hampton leads the team in three-point percentage at an impressive 40.6%. His 7.7 points per game look disappointing, but Hampton has also only seen the court for 18.7 minutes per game this season.

It is also important to not overlook Terrance Ross, as he is the veteran of the team has been with the Magic since 2016. The 30-year-old veteran brings 10 years of experience into the locker room this season. A vital part of any rebuilding team is to have a player who can pass on his experience to the younger guys and someone who can be a leader. Ross fills that role for the Magic, and he will be a big part of helping the team grow in their rebuild.

Why Are The Magic Struggling?

Now with the team sitting at 5-20, obviously a lot needs to change if they wish to start winning games. It does not help with the fact that the team is not performing great on either side of the ball. In both points per game and opponent points per game, the Magic rank towards the bottom of the league. As a result, the Magic also have the worst average point differential at -10.7 per game.

Some issues could result from first-year head coach Jamahl Mosley. As with any coaching change, there are bound to be issues starting out as the team learns a new system. Put that alongside the reality of a young core and a coach who is head coaching in the NBA for the first time ever, and you get the issues surrounding the Magic.

The issues surrounding the team are not due to bad players or a bad coach. It all comes down to experience. With the team faltering in as many facets of the game as they are, it is hard to pinpoint one or two issues they need to fix. The team is talented but young. They will naturally get better with time.

Jack Shivertaker is a senior at the University of Florida pursuing a degree in Journalism with a focus on sports media.
@JackShivertaker
Previous Notre Dame Names Marcus Freeman As Head Coach
Next St. Francis Catholic Loses Tough Battle 36-31 Against Union County