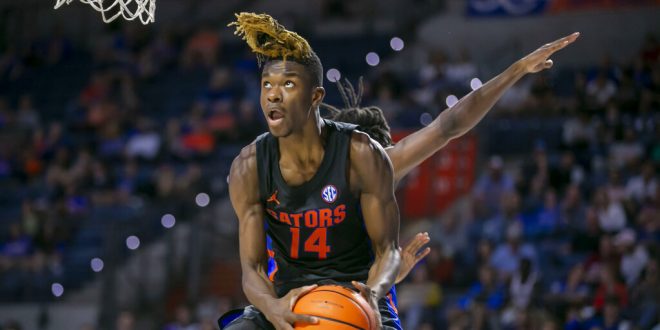 Following a disappointing loss to Texas Southern, the Gator men’s basketball team got the win against North Florida with a score of 85-55. The Gators (7-2) will be looking to continue their momentum when they face-off with Maryland.

Coach Mike White attributes his team’s ability to bounce back from the character in the locker room. He said, “We got a lot of humility, we got a lot of guys that are open and honest.” In addition, he credits the veterans for stepping up and how the team was still recovering from its road loss to Oklahoma.

Coach Mike White will be looking to get a similar effort when his No. 20 ranked squad takes on a Maryland team currently dealing with the departure of their head coach.

Head basketball Coach Mark Turgeon, resigned after eight games into the season following fan unrest. He left with a career record at Maryland of 226-116. Current interim coach Danny Manning has had coaching stints at Tulsa and Wake Forest.

In his 10 full seasons with Turgeon leading the program, the Terps managed to go to one Sweet 16 and never appeared in a conference title game.

With the coaching change, Maryland is skidding right now and will have a tough test against the Gators. They’re currently 5-4 on the season and have lost three in a row.

Like the Gators, Maryland is led by a veteran group. They have four players that average double figures and will lean on senior Eric Ayala who averages just over 13 points a game.

What to watch for

Florida head coach Mike White may expect his team to play hard. He said, “We play hard, this team plays hard.” He attributes the veterans in his locker room for establishing his team’s culture and will be looking for a good effort versus Maryland.

In the loss against Texas Southern, it seemed like the Gators were out-hustled losing the rebound margin by 23 points. White says that is not the identity of this team and the Gators pride themselves on hustle, rebounding and executing on the defensive side of the ball. This could play a key role against the Terrapins.

Maryland may look to slow down the scoring of Florida forward Colin Castleton. The 6’11 senior is currently averaging 15.7 points per game and is leading the Gators in scoring.

Despite Castleton’s strong start to the season, the Gators have struggled to shoot the ball from deep the last few games. Against UNF they were 5-21, 5-24 against Texas Southern and 4-24 versus Oklahoma. For the Gators to take the next step as a team, these shooting struggles must stop. Even with the shooting woes, Myreon Jones says the Gators are still putting up good shots and they’ll start to go in eventually.

Florida may look to rely on their defense which is allowing 59.1 points per game this season. Meanwhile, the Terps may look to limit their turnovers against an opportunistic Gators defense that has been forcing 18 turnovers per game.

Previous Gators Look For Third Straight Win, Host FSU
Next FEATURE: Ben Davis, The Junior Who Can Do it All 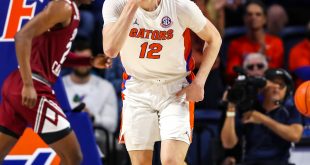 On Wednesday, the Florida men’s basketball team (12-8, 5-3) breezed past the South Carolina Gamecocks …