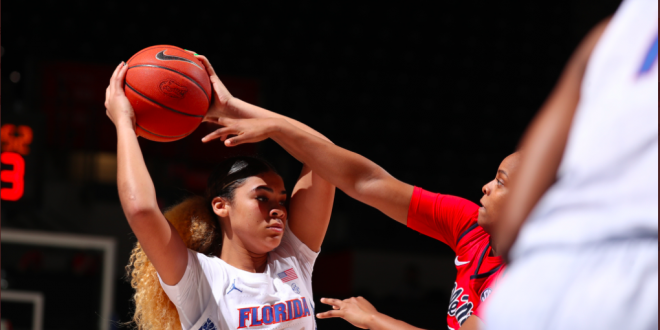 The Florida Gator Women’s Basketball team (8-3) look to get their third straight win as they host the Florida State Seminoles (6-2) in another edition of this rivalry.

Florida is hoping they can take down the Noles with the Gators last win in the series coming in 2015.

The Gators are 4-0 on their home floor this season with their last win coming in a close one to Dayton. Florida is beating their opponents by an average of 13.5 points per game at home and will look to carry this into tomorrow’s matchup.

In addition, the Gators have shot the ball efficiently in their last two home games. They shot just over 40% from the field in the win against Dayton and were lights out against USC Upstate shooting 48.3% and 6-14 from deep. FSU plays stout defense so to come out with the win, Kelly Rae Finley’s squad must shoot the ball well.

Like they’ve been for the majority of the season, the Gators were led by junior guard Lavender Briggs in the win against Dayton with 18 points. After a slow start to the season, Briggs seems to be hitting her stride. She is averaging just over 18 points per game in the last four games as the Gators are 3-1 in this stretch.

Briggs now sits at 938 career points and is just 62 points away from becoming the 27th player in Gator history to join the 1,000 club.

How the Noles have Faired

The Seminoles also come into this game looking for their third straight win. However, when they take the court tomorrow, it’ll be the first time in a week since they played; they may have have some cold legs.

FSU is led by senior guard Morgan Jones who is a scorer of her own. She has scored in double figures in all but one game this season. She could prove to be a problem for the Gators as she also does well off the boards. While averaging 14.7 points this season on 53% shooting, the guard also averages 7.3 rebounds.

While FSU has a better scoring offense (70.3 vs. 67) and scoring defense (50.1 vs. 62.5) turnovers could be the difference in this game. Both teams average 17 turnover a game so whoever makes less mistakes could be the one to come out on top.

The game will tip-off tomorrow night from Exactech Arena with game time schedule for 1 o’clock. Coverage of the game starts on ESPN 98.1 FM/850 AM WRUF at 12:45.

Previous Saint Francis Wolves loses 49-30 to the HEART Falcons in the Wolfden
Next College basketball: Florida vs. Maryland game preview