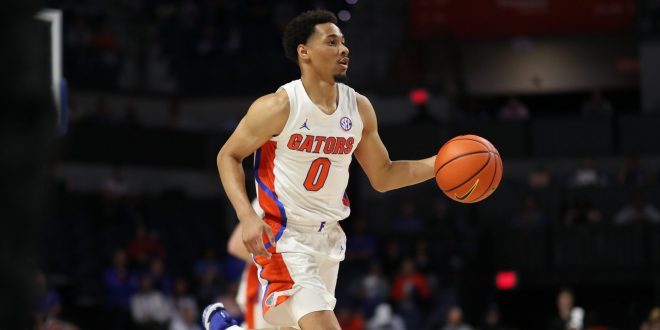 The Florida Gators men’s basketball team (8-3) won 66-55 against the USF Bulls (4-5) in the Orange Bowl Classic. The Gators bounced back from a 70-68 loss to Maryland after a six-day hiatus from action.

Colin Castleton secured a double-double, with 12 points and 11 rebounds in the contest. Phlandrous Fleming Jr. also chipped in 12 points, and Anthony Duruji contributed 11 points and nine rebounds. For the Bulls, Caleb Murphy led the show with a game-high 16 points while adding five assists.

Both teams typically rely on their defense, with the Bulls entering the game with the 11th-ranked scoring defense in the country, and the Gators leaning on their hustle play to lock down opposing shooters.

The Gators took a while to lock in offensively, as the Bulls got off to a 10-3 start to the game. Florida responded with a quick 7-0 run of their own, though, capped off by a Tyree Appleby steal and slam to tie it at 10-10.

From there, the Gators found a groove shooting the ball, especially from beyond the arc, something Florida has struggled with all season. Guard Myreon Jones capitalized on loose defense with a tear drop shot and then a corner three-pointer on back-to-back possessions to give the Gators a 25-18 lead with just under three minutes left in the half.

They kept that momentum going into halftime, both offensively and defensively, as they rode a 17-2 run to a 30-18 lead at the break. Jones, Duruji and Fleming led the Gators with five points each, and they shot 5-of-15 from beyond the arc at halftime.

The Bulls hung with the Gators much more in the second half.

After Duruji knocked down a three-pointer to kick off the second half, the orange and blue led 33-18 for one of their biggest leads of the game.

But revitalized play by Jake Boggs, who scored all eight of his points in the second half, and continued consistent play from Caleb Murphy kept the Bulls in the game. They went on a 6-0 run to cut their deficit to single digits early in the second half.

Bulls guard Javon Greene knocked down a three-pointer to cut it to a 48-45 lead, but that’s as close as it would get. Castleton made his presence known inside the paint in the second half, scoring nine of his 12 points, and staving off a reawakened Bulls offense.

So despite outscoring the Gators 37-36 in the second half, the Bulls ended up falling short.

FINAL: @GatorsMBK finds a groove from beyond the arc and uses efficient defense to knock off @USFMBB, 66-55.

.@Castleton_ secured a double-double for the Gators with 12 points and 11 rebounds, and Phlandrous Fleming chipped in for 12 of his own. #GoGators #ChompChomp pic.twitter.com/1MrXzHIPN3

Both teams are nearing the beginning of their conference schedules but still have some action before then. Florida will host Stony Brook on Dec. 22 for their final non-SEC matchup, and the Bulls will play BYU on the same date in the Hawaiian Airlines Diamond Head Classic.

I'm a third-year student at the University of Florida passionate about storytelling and sportswriting. My goal is to work in communications for a professional sports team after I graduate.
Previous Gators Nab Nine Recruits On Early Signing Day
Next Jaguars Fall to Texans in Jacksonville