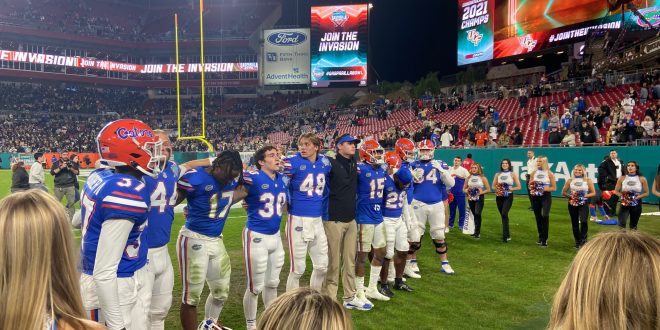 The matchup between Florida and UCF finally came. For the Florida Gators, they’re glad it’s finally over.

In the midst of head coaching changes, upsets when heavily favored and hope for the future, the Gators just couldn’t end it on a high note.

After leading by a point at halftime, 10-9, UCF outscored them 20-7 to win 29-17. Gators interim head coach Greg Knox said penalties and other costly mistakes were made.

The Gators committed eight penalties, being pushed back 85 yards during the game.

Much of this is due to the weak passing in the game. In what might be his final game at Florida, quarterback Emory Jones completed just 39 percent of his passes. In a game where he managed to not turn over the ball, he could not capitalize.

That being said, they converted three of three times in the red zone.

If You’re the Gators, Justin Shorter is What Matters Right Now

Let’s be real, by the time the game was over, the loss was the last thing on a lot of the players’ minds. Wide receiver Justin Shorter took a hard hit trying to receive a pass from Emory Jones.

He lied on the ground motionless as his teammates came to his side. He was carted off.

Reports say he was conscious and responsive as he was carted off the field. During the press conference, Knox had no update on Shorter.

A rough season for the Gators is finally over. When they take the field next, it’ll be the first game of the Billy Napier era. There’s a lot of hope for the future, and the graduating Malik David feels that’s the case.

The next Gators game will be on Saturday, Sept. 3 in the Swamp. The Gators host the Utah Utes to kickoff a new era.

Harrison is a sports coordinator at ESPN 98.1 FM/850 AM WRUF. He served as a beat writer for Florida Gators football for the 2019 and 2020 seasons. He also contributes to WRUF's Gainesville Sports Center segments and makes appearances on the Clash on Harp on Sports. Harrison has been a content writer for WRUF since January 2019 as well.
@HarrisonSmaj
Previous Pat Dooley’s Grades: UCF vs UF
Next Pat Dooley’s ‘Back 9’ Dec 27th