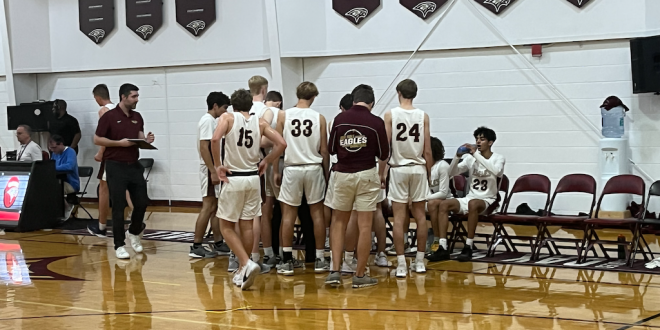 Oak Hall got off to a slow start in the first quarter, allowing Christ’s Church Academy to score 15 straight points in four minutes. Entering the second quarter down by 12, the team slowly worked their way back into the game. A pair of three-point baskets from freshman Dakota Brower at the end of the half cut the deficit to four points. With the score sitting at 26-30 at halftime, the team knew they had to step up in the final two quarters.

“[The team’s] biggest motivation was that they were behind and they were on a three-game losing streak, and they felt like at home, they should come in and win,” Oak Hall Assistant Coach David Stirt said. “When we play well, we usually win, and we played so poorly in the first half.”

After the half-time break, Oak Hall responded to their struggles by adjusting their game plan. Head coach Monte Towe had the team switch from a man-to-man defense to a zone defense and added more defensive pressure in the backcourt. As a result, the team took off running and never looked back. Oak Hall scored 23 points in the third quarter alone while holding Christ’s Church Academy to nine points in the entire second half.

“We were just thinking, ‘Keep the pedal down. Don’t let up,'” Oak Hall sophomore Andrew Powell said. “We just had to keep our energy up and just keep doing what we were doing.”

Powell played a large role in the team’s offensive explosion, outscoring Christ’s Church Academy’s entire roster in the second half. He accredits this takeover to a halftime adjustment to his shot selection.

“In the first half, I was mainly shooting threes, and I wasn’t knocking any threes down. So I switched to mid-range, and once I switched… that’s when I started knocking [shots] down. I was able to get open just by moving around,” Powell said.

Following Thursday’s big win, Oak Hall will hope to build on their momentum as they close in on the postseason. Their next matchup is on Jan. 20 at Abundant Grace Community Church, where they will face the struggling Cornerstone Academy Cougars at 6 PM.

“We feel like we’re in a position to head into districts with a strong winning streak,” Stirt said. “Hopefully, this will get it started.”

Jack Meyer is a second-year student at the University of Florida. He is majoring in Journalism and specializing in Sports and Media.
@jackmeyerespn
Previous Gators Women’s Basketball Upsets No. 23 Kentucky 77-52
Next Gators Gymnastics Ready for Georgia