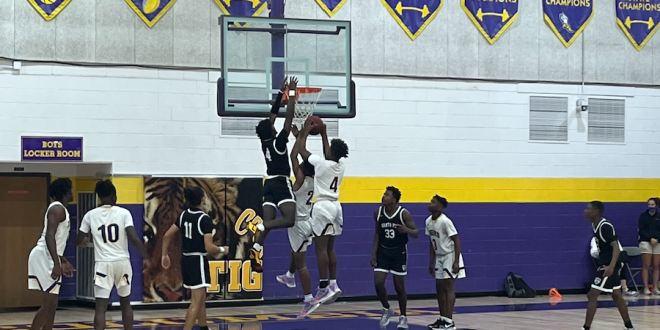 In an electrifying matchup that featured plenty of dunks, steals, and even some cheers and jeers from the crowd, the Columbia Tigers fell just short to the Santa Fe Raiders in a 69-61 loss. The Tigers managed to hold on to their lead for most of the game. But when the Raiders took a 59-57 lead midway through the fourth quarter, they never looked back.

Main Takeaways for the Tigers

Both teams played aggressively on both sides of the ball tonight, leading to plenty of whistles from the referees. The Raiders committed 16 fouls tonight, while the Tigers committed 11 fouls. The Raiders were particularly aggressive in guarding Tigers junior guard Isaac Broxey. Broxey managed to put up 18 points, but he was consistently hounded by Santa Fe defenders whenever he brought the ball up. He eventually fouled out near the end of the game.

Broxey was not the only source of offense for Columbia on Tuesday night. Sophomore guard Jerome Carter chipped in with 11 points, while senior big man Marcus Peterson led the team with 20 points. 11 of Peterson’s points came in a big second quarter for the Tigers, who entered the half with a 10-point lead.

“[I was thinking] I got to help my team win, so let’s win it,” Peterson said in reference to his impressive second-quarter performance.

However, as the second half began, standout Raiders guard Dontrell Jenkins took over to help his team mount a comeback. Jenkins would put up 15 points in the second half and went on to finish the game with 26 points total; his performance gave Santa Fe the spark they needed to eventually take the lead back. Jenkins even received high praise from Columbia head coach Steve Faulkner, who called Jenkins “one of the better players in the area.”

One big killer for the Tigers in tonight’s matchup was rebounding. The Raiders capitalized on multiple second-chance opportunities, while the Tigers struggled to keep up on the boards. Faulkner listed offensive rebounding as something the team hopes to improve on in their coming games.

“We’ve got to match their physicality, we can’t let that affect us,” Faulkner said. “We’ve got to do a better job rebounding. We gave up some key offensive rebounds in some situations.”

What’s Next for the Tigers?

Tuesday’s loss dropped Columbia to 11-10 on the year. Their next game will be this Friday at 7:30 p.m. when they will visit the Trinity Catholic Celtics. Coach Faulkner hopes the team will bounce back and shift their focus to preparing for what comes next.

“We’ve got to come tomorrow and get better,” Faulkner said. “Hopefully [we can] talk about this and figure out ways that we can improve on matching the other team’s urgency.”

Jack Meyer is a first-year student at the University of Florida. He is majoring in Journalism and specializing in Sports and Media.
@jackmeyerespn
Previous Newberry Dominates Dixie County as Aggressive Defense Leads to Transition Offense
Next Oak Hall triumph over St. John Lutheran in 66-41 Victory