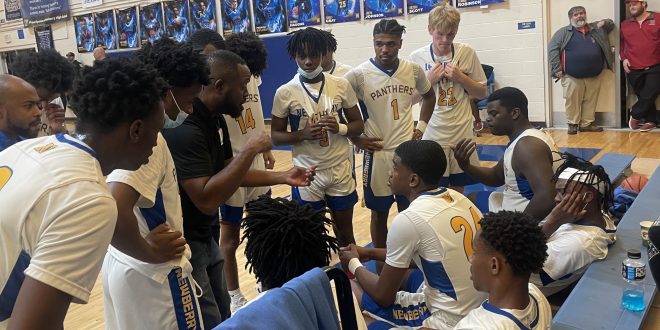 Things got out of hand quickly as the Newberry Panthers defeated Dixie County Bears by a score of 56-29 in an inter-conference matchup Tuesday night. After dropping three of their last five, Newberry has won back-to-back games and hoped to win a third straight. The team dominated in a very convincing win as they gear up for a state championship run. The recipe to their success? Aggressive defense leading to turnovers and the transition offense that ensued putting this game out of reach by halftime.

From the very first possession, head coach Patrick Green made things difficult for the Dixie County Bears by placing a defender at the high post position and double-teaming whoever possessed the ball. As a result of this aggressive defensive scheme, countless turnovers were forced by the Panthers, which then led to points on the board for the Panthers and mounting frustration for the Bears.

In addition to the physicality that they played with, the Panthers dominated the post both offensively and defensively. Lennie Boykin made his presence known down low through his impressive rebounding and by converting on two layups. Reggie White controlled the paint and led the team in scoring with ten points, with most of them coming off of put-backs while in transition.

After Joe Carter III converted his first three shots from the field, with two of them coming in transition, Dixie County called an early timeout. This avalanche in scoring continued, with more turnovers by Dixie County and more transition buckets resulting. At the end of the first quarter, the score was 18-1 in favor of Newberry.

Much like it has been the rest of the season, the Panthers were able to not only score many points but do so in variation. Eight different players scored in Tuesday night’s game for Newberry.

While Michael Moore and Reggie White led the way with ten points each, everyone seemed to be getting in on the fun as the ball quickly made its way down the court.

Joe Carter III started out extremely hot, scoring the team’s first eight points, with six of them coming from behind the arc. #2 Perrion Sylvester and Corey Jelks both scored seven points, with most of them coming off of transition layups and put-backs.

it’s getting out of hand here as we approach the end of the first half.

yet another transition bucket by #0 Reggie White of #Newberry and the Panthers are running away up 32-1. pic.twitter.com/ilLChSlTP5

After a few fast transition buckets, Dixie County called another timeout early in the second quarter. The Panthers continued to put on an absolute clinic of converting defense to offense, with more steals and blocks leading to scores. After Dixie County converted its first field goal of the game towards the end of the half, the score was 32-4 in favor of Newberry at halftime.

All Gas, No Breaks

Although the scoreboard said otherwise, Green saw this as a 0-0 game. He refused to take his foot off the gas and chose to stick with his aggressive trap defense. This prevented Dixie County from advancing the ball anywhere past the three-point line.

As the second half began, Dixie County began to hit a few shots and began to show signs of life. After three consecutive baskets from Dixie County, Green took a timeout early in the third quarter.

Green talked to his squad and told them to “get comfortable”. He said that it appeared that they were rushing possessions at times or trying to do too much. He praised his team’s defensive play but told his team to slow it down when moving the ball downcourt.

Timeout by Coach Green after an early 6-0 run from #DixieCounty.

Coach Green telling his offense to “get comfortable” after possessions seemed rushed at times. pic.twitter.com/PLR1o9rUGx

After the timeout, the Panthers began to do exactly what their head coach had told them to do. The offense began to slow down and a few buckets began to pour in from Michael Moore and Perrion Sylvester. The gymnasium was electric after Reggie White recorded a steal and slammed a dunk on the ensuing fast break. At the end of the third quarter, the score was 46-12.

Having Fun With It

As the fourth quarter began, Green understood the reality of the situation and let his players have some fun. Perrion Sylvester and a few other players attempted to throw down a few dunks with the crowd going crazy at the sight of each attempt.

Nearly one of the highlight reel plays of the night.

#2 Perrion Sylvester just misses on an aggressive dunk attempt off of an offensive rebound. pic.twitter.com/s6VMawfoAE

Not too long after, Green pulled the starters with a little over six minutes remaining in the game. This gave an opportunity for the bench players to earn some big-time minutes in the game, which has occurred on numerous occasions this season.

After the game, head coach Patrick Green praised his team’s unselfish play. He admired the fact that the Panthers were having fun and playing hard at this critical time of the year.

Green also mentioned that although the team does make a lot of mistakes, the team’s effort makes up for it. He hopes they can clean up these mistakes down the stretch and applauded the team’s effort.

Newberry (16-4) will take on District foe Bronson (14-8) at home in a key matchup that could decide who will enter the playoffs as the No. 1 seed of 1A District 7. The game tips off on Thursday night at 7:30 p.m. at Newberry High School.