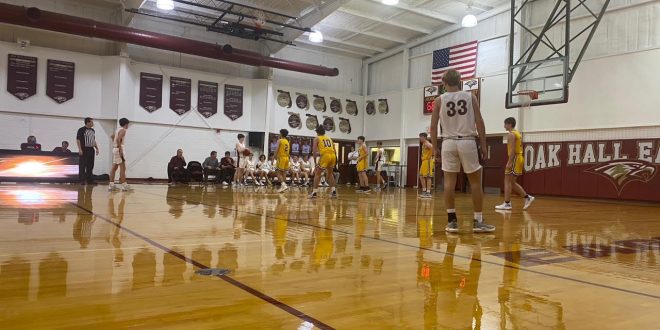 The St. John Lutheran Saints (2-13) came into town to take on the Oak Hall Eagles (9-5) on Tuesday night. Coming off of a blowout win over Cornerstone Academy on Friday night, the Eagles hoped to make it two wins in a row before districts kick off next week. The Saints come into the contest hoping to snap a six-game losing skid.

Right from the opening tipoff, the Eagles were at it defensively. They opened the game in a half-court press in which they constantly trapped their opponents. Oak Hall made it extremely difficult for the Saints to get open looks forcing a season-high 15 turnovers in just the first half. St. John Lutheran didn’t have much of an answer for the Eagles’ defense. Oak Hall’s strong defensive first quarter allowed the Saints to only five points. Head Coach Monte Towe believes it was one of their best games of the year defensively. They continued this energy for the rest of the first half and didn’t show any signs of slowing down.

Oak Hall took the lead within 30 seconds and never looked back. Their high pace offense was too much for the Saints as points came effortlessly in the first half. “73, 73!” called Coach Monte Towe as Sacred Heart Lacrosse signee Michael Moreschi came off a screen and opened the game’s scoring with a layup. Moreschi poured in 16 points including 12 in the first half. Moreschi is the “straw that stirs the drink” said Coach Towe. “He got us going” and had his “best game of the year”  Towe also added. Moreschi is making it official with Sacred Heart on Wednesday, January 26th.

The Eagles are and ready to take on the second half. Stay tuned to see what comes next! pic.twitter.com/pG3YWGAVNY

Despite a better half shooting the ball, the Saints had no chance of mounting a comeback. Oak Hall continued to control the tempo of the game by being active on defense as well as physical on offense. Coach Towe used a variety of players to compete with an eight-man squad from St. John Lutheran. The players were fresh and ready to go throughout the entire second half compared to a depleted Saints team. Coming off of a 26 point performance last week, sophomore standout Andrew Powell contributed 12 points.  However, the Saints connected on a couple of triples late in the third quarter to start some momentum. They ended up scoring 26 points in the second half compared to only 15 in the first. Unfortunately, it was too little too late for St. John Lutheran as they end up losing the contest 66-41.

The Eagles look to extend their winning streak to three games as they are on the road to take on Keystone Heights on Friday, January 28th.