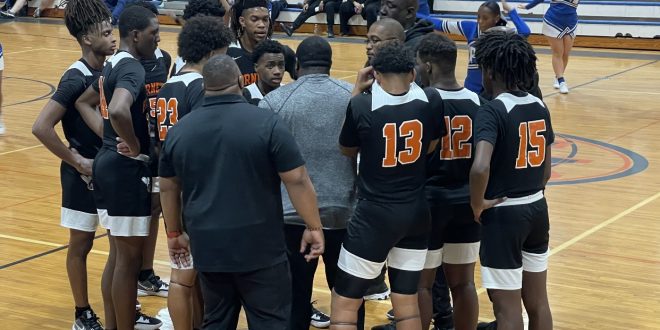 Hawthorne Hornets Pull Through with a Victory Against P.K. Yonge Bluewave

After the P.K. Yonge Blue Wave took down the Hawthorne Hornets just a few weeks ago on Jan. 20, the Hornets came into Tuesday night’s game with a whole new energy. Hawthorne managed to live through a fourth-quarter Blue Wave comeback to defeat P.K. Yonge 55-53. With a highly intense rivalry between the two teams; parents, cheerleaders, and students were roaring on both sides of the court as both squads fought for the win.

To start off the game, the Hornets won the tip-off. The Blue Wave was quick to react, pushing them back into defense for the first couple minutes of the game. Hawthorne had the ball in play and junior Jailen Ruth sprinted down the court and dunked, owning the first point of the game, as he hung from the rim.

Quickly after, junior Eli Harris was able to clinch a layup to bring the Blue Wave back into play. Hawthorne fought back as junior DJ Slater got ahold of the ball, and sunk a three-pointer for the Hornets.

The game continued, as the first and second fouls were both called on Hawthorne; P.K. Yonge had the ball back in possession but it was not long until the Hornets won it back. As communication and aggression heightened between both teams and players, the first quarter concluded, with Hawthorne holding a lead of 9-6.

Furthermore, coming into the second, both teams were on their toes keeping up the energy.

Following this, the game became aggressive and reckless. Additionally, offensive fouls were called left and right on the Blue Wave as they were trying to get past the sturdy defense the Hornets put forth. P.K. called a timeout to strategize, which worked in their favor when Blue Wave senior Aaron Small got a steal passing off to Jordan Richardson who scored a layup.

However, this energy did not last long when freshman CJ Ingram got a steal and ran down the entirety of the court getting a layup for the Hornets. Throughout the rest of the quarter, Hawthorne continued to rack up the scoreboard as the Blue Wave trailed slowly behind, coming to a score of 21-14 at halftime.

High intensity throughout the first half has the Hawthorne Hornets with a lead of 21-14 against P.K. Yonge Bluewave. @PKYBasketball @HawthorneHoops

Hawthorne owned both sides of the court in the third quarter, banking in nine of their 12 shots from the field and limiting the Blue Wave to five-for-14 shooting.

With 1:39 remaining in the quarter, Ingram connected on his second free throw of the night to give the Hornets a 42-24 lead. The 18-point difference was their largest on the night. The Hornets were able to outmaneuver the Blue Wave’s defense, as most of their shots came from the low posts save for a Ruth slam dunk and Slater triple with 3:54 on the clock.

P.K. Yonge’s offense went cold out of halftime, with Richardson attempting three shots from beyond the arc only to come up empty each time. The Blue Wave missed five consecutive shots late in the quarter to hand Hawthorne a significant advantage. The Hornets banked in eight in a row over a five-minute period to send a 42-28 ballgame to the fourth quarter.

At the start of the last quarter, one could feel the tension rising in the P.K. Yonge gymnasium as Hawthorne began with the ball in play. Ruth immediately bagged a layup for the Hornets. Quickly after, the ball was turned over to P.K gifting them with two free throws, one being a success.

Shortly after, with the ball back in play, Ruth gained possession and scored another layup for Hawthorne. Then, with intense energy, Bluewave junior Isaiah Cooper dunks, leading to a timeout for Hawthorne at the 4:32 mark.

The crowd began to get restless as the Blue Waves score another layup. A foul was then called on Hawthorne and three more points were scored from PK’s free throws. This made the score 51-50.

One minute on the clock, a timeout for P.K. The last foul on P.K. Yonge gave Hawthorne’s Ingram two free throw shots which both sunk. 55-53, the clock ticks down second by second as the ball is thrown around the court. The energy and noise level in the building was a 10.

Hawthorne kept fighting with the competitive revenge deep inside of them and was able to hold the two-point lead until the buzzer was heard. The Hawthorne Hornets had just beaten the PK Yonge Blue Wave, a long embedded rivalry, after a well-fought battle.

Head Coach Greg Bowie says a few words about what helped the team pull through with a win tonight for the Hornets.

“It’s all about the energy”

Playoff game vs. TBA at Hawthorne and time TBA on Wednesday, Feb. 2.