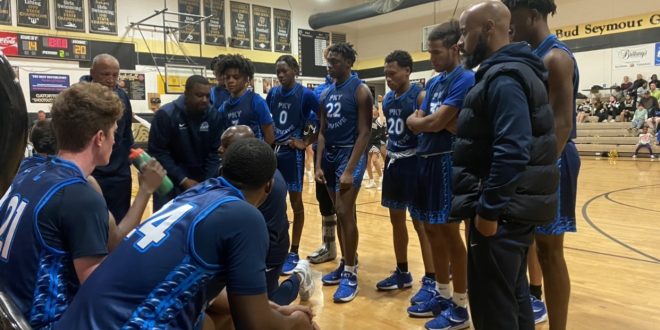 P.K. Yonge Bluewave Defeats the Buchholz Bobcats for the Second Time this Season

After a win against University Christian High School Friday night, P.K Yonge Bluewave came in with the same winning mindset the following day, dominating against the Buchholz Bobcats Saturday evening, 61-48.

Buchholz came in with high energy and won the tip-off. Following this, Nay’Ron Jenkins immediately scored a layup, and Colsen Orth scored from 3-point range for the Bobcats. The Bluewave was quick to get their heads in the game, locking down their defense and closing in on the fast-paced offense the Bobcats were putting forth.

Moving on in the quarter, Patton Pinkins scored a 3-pointer for the Bluewave, getting the team on the scoreboard. Yet, the Bobcats kept a good fight going, and scored two more 3-pointers, while the Bluewave was still trying to find their momentum. A few seconds later, the Bluewaves’ offense began to step up, and Seth English scored two free throws with ease, followed by Randall Robinson who did the same. This left P.K. Yonge down at the end of the quarter with a score of 20-14.

After the Bluewave’s rough start, they started to regain their footing during the second quarter. With a high-turnover rate throughout this quarter, the Bluewave showed more fight toward the Bobcats. Within seconds of the quarter starting, Tyler Gainey scored a 3-pointer for the Bobcats. Yet, this was quickly followed by a 3-pointer by Jordan Richardson for the Bluewave, showing that the team was still in the game.

Fans for both teams were on their feet and cheering as the game got more intense. The Bluewave started to get frustrated in the middle of the quarter as they were completing shots, but the Bobcats still had control, refused to back down, and pressed highly on Bluewave’s defense. As the half came to an end, the Bluewave finished on a good note with Patton Pinkins scoring two free throws.

After an intense first half, The Bobcats hold a lead of 29-26 over Bluewave.

Before the start of the second half, Coach Boderick Johnson reflected on the teams’ play from the first half.

With a confident start to the second half, Seth English came in with a layup for the Bluewave. Quickly followed by another one taken by Patton Pinkins. The Bobcats stood strong and continued to press on the Bluewave’s defense completing a free throw shot taken by Daryus Boyd. Both teams were on their toes and the audience watched closely as the game tightened up, when Anthony Delucas took a shot for Bluewave bringing the game to a tie of 34-34.

With 3:30 minutes left in the third quarter, the Bluewave turned their energy up a notch. Excitement spread when Jordan Richardson scored not only one but two 3-point shots bringing the Bluewave to hold the lead. The momentum had finally set in with the team and the Bluewave continued to rack up the scoreboard throughout the rest of the third.

Closing in on the Win

As both teams entered the final quarter, hearts were racing. The Bluewave’s Aaron Small came in strong taking on the Bobcats defense, finishing off a shot. The change of play this quarter brought a higher completion of shots and a lower turnover rate for the Bluewaves. The Bobcats weren’t matching this energy, which led them to fall short and lose sight of the game.

In the last minute of the game, Isaiah Cooper made two shots for P.K. Yonge, within 20 seconds of each other, to end on a good note. This led to a well-deserved win, 61-48 for the Bluewaves.

High energy throughout the second half, P.K Yonge Bluewave secured a win against the Buchholz Bobcats. A final score of 61-48. @pkyongedrs @PKYBasketball

Reflecting on the Game

After the Bluewaves impressive performance in the second half, Coach Boderick Johnson talks about the changes that helped improve this play.

Coach Johnson also emphasizes going forward “We are going to continue to get better and maintain our continuity.”

The P.K. Yonge Bluewave have a home game against the Hawthorne Hornets Tuesday, February 1.