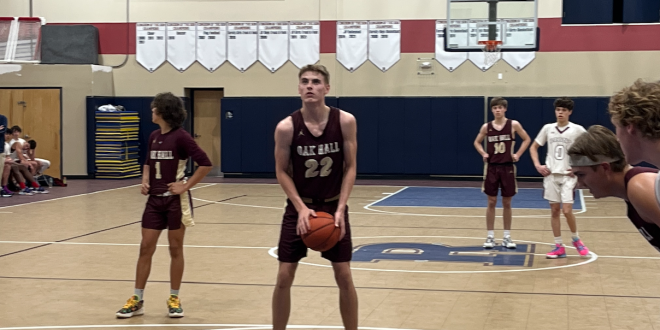 Oak Hall Walks Away Victorious In Nail-Biter Against Redeemer Christian

In a tight matchup that came down to the wire, the Oak Hall Eagles defeated the Redeemer Christian Lions 52-49.

Freshman Dakota Brower led the Eagles with 13 points, including three three-point shots in the second half. Sophomore Andrew Powell and junior Dylan Provencher also chipped in with 11 and 10 points. Meanwhile, Lions junior Andrew Powers started off hot with nine points in the first quarter alone. The Eagles, however, held him to four points for the rest of the game, leaving him with 13 points total.

The Lions started off red-hot from long range, with the team combining for six three-pointers in the first quarter. They also dominated the offensive glass – grabbing several offensive rebounds that turned into second-chance points. The Eagles kept the game within reach, but they were seemingly unable to stop the Lions’ scoring outburst for the first eight minutes. By the end of the quarter, the Eagles trailed 17-9.

The Lions are out to a 12-7 lead with 4:27 remaining in the first. The Eagles have been solid offensively but have struggled guarding the three so far. pic.twitter.com/VBpZe9WCOX

However, Oak Hall‘s defense saw a massive improvement entering the second quarter. While the team was heating up offensively, it held the Lions to just four points in the period. One reason for the defensive success was a shift in strategy.

“I thought the man-to-man was the real key for us to go ahead and [put] pressure on them,” Eagles head coach Monte Towe said. “It was really the key to us coming back and winning the game.”

Provencher also had a strong quarter, scoring six points while helping his team combat Redeemer Christian’s dominance on the boards. While the Eagles were still down 28-23 at halftime, they had found their rhythm and were ready to take control.

Following a stellar second quarter, the Eagles have narrowed their deficit to 5 as they trail the Lions 23-28. The Eagles have improved their on-and-off the ball movement throughout the game, as shown in this play by sophomore Andrew Powell. pic.twitter.com/1TuUEfozag

The Eagles maintained their high level of play to start the third quarter, taking their first lead of the game less than two minutes in. However, the Lions did not go down without a fight, and the game became much more aggressive as it went on. Both teams committed nine fouls each in the second half; for reference, the Eagles only committed two fouls in the first half, while the Lions committed four.

The Eagles’ main source of offense in the third quarter came from Brower, who scored 8 of his 13 points in the period. His motivation in the second half came from his struggles earlier in the game.

“In the first half, I missed two threes in a row, so I was kind of mad,” Brower said. “So in the second half, I was like, ‘alright, I’m just going to make every three this time,’ and I just kept making them.”

On the defensive end, the Eagles saw an impressive outing from Powell, who recorded multiple blocks and steals. While he is normally a scorer, the Lions put heavy pressure on him all game, limiting his offensive output. The team responded by emphasizing ball movement to find open shots.

“Once we got the ball moving, we found a bunch of openings [and] people got a ton of shots,” Powell said. “That’s when things started opening up on the offensive side.”

By the fourth quarter, the Eagles held a narrow 40-38 lead. There were multiple lead changes in the final eight minutes of play, and the game went down all the way to the final play. With less than ten seconds remaining, Oak Hall held a 50-49 lead, and Provencher grabbed a key defensive rebound. Provencher got the ball to sophomore Jackson Beach, who was promptly fouled by Lions junior Tuna Hill in an attempt to stop the clock.

Due to Hill’s aggressive foul that nearly sent Beach flying into the Lions bench, the officials called it a flagrant foul; as a result, Beach received two free throws and the Eagles received possession after Beach’s trip to the line. Despite the home crowd’s attempts to distract him, Beach sunk both to ice the game for Oak Hall.

Eagles win! After a back-and-forth final quarter, sophomore Jackson Beach iced the game with a pair of clutch free throws to secure a 52-49 win for Oak Hall. Their next (and final) regular season game will be this Thursday at 7:30 PM, when they will host the Cornerstone Cougars. pic.twitter.com/BKggDoArOo

Coming Up For the Eagles…

Jack Meyer is a first-year student at the University of Florida. He is majoring in Journalism and specializing in Sports and Media.
@jackmeyerespn
Previous Tim Kurkjian Gives Insight on the MLB Lockout
Next Hawthorne Hornets Pull Through with a Victory Against P.K. Yonge Bluewave