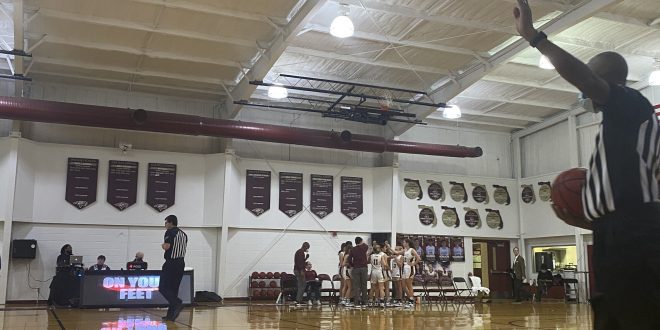 Injuries plagued the Oak Hall Eagles (11-3) as they defeated the First Coast Christian Knights (10-4) 48-20 Tuesday Evening. The game was the first matchup of the postseason for both teams in the district quarterfinal.

Out of the gate, the Eagles were aggressive as usual. They started the game in a half-court press ensuring that any player on First Coast would not have time with the ball. As they settled into the game, they went back to their typical 2-3 zone.  Immediately, they were a force in the paint, scoring their first eight points from inside.

Junior point guard Kate Pickens got her teammates involved early and often notching a pair of assists. The Eagles, as they have done throughout the season, ran their offense through their two seniors. Tyla Young and Bella Dyrkolbotn “are going to be truly missed,” says assistant coach Barry Hutchinson. However, First Coast Christian were able to maintain pace with the Eagles as they were only down 14-9 at the end of the first quarter.

The second quarter is where it all changed for the Eagles. They outscored the Knights 16-2 in the quarter constantly winning the battle in the paint. However, less than a minute into the quarter senior guard Tyla Young went down with an ankle injury. She did not return for the rest of the game and had ice on her ankle for the remainder of the evening. Coach Hutchinson did not comment on her injury and her status for the district semifinal is uncertain.

Eagles lead at the break 30-11. Senior Tula Adams went down with an apparent ankle injury and it doesn’t look like she will return. pic.twitter.com/XR5NPlBfyl

More of the same

The Eagles carried their dominance into the second half and didn’t hold back. Freshman shooting guard Leila Sims had one of her best games of the season with 11 points. Senior forward Bella Dyrkolbotn contributed 14 points in a very impressive performance. Sophomore guard Mary Pizzurro came off the bench and had 11 points in the win. All was going well for the Eagles until point guard Faith Pickens went down with an ankle injury of her own. Two injuries to two crucial starters trouble the Eagles as they head into the next round of the postseason.

The Road Ahead for Oak Hall

Oak Hall is getting hot at the right time as their win streak improves to seven games. The Eagles travel to University Christian who boasts a 13-11 record in their district semifinal matchup on Thursday, Feb. 3.