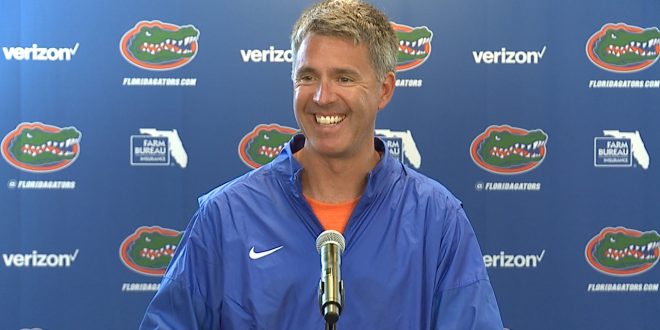 Gators Women’s Tennis Back In Action

The win over the Seminoles qualified the Gators for the Indoor National Championship in Madison, Wisconsin. With a record 0f 4-0, the Gators sit atop of the SEC standings.

The tournament takes place from Feb. 11-14, marking the first time that the Gators have reached the tournament since 2018.  Just a year prior, the Gators had taken down the North Carolina Tarheels to win the 2017 Indoor National Championship. The Gators later won the NCAA Championship that May, defeating the seventh ranked Stanford Cardinals.

On Feb. 3, the Gators will face off against the 17th ranked Old Dominion Lady Monarchs at 5 p.m.  Old Dominion is also undefeated, qualifying for the tournament after a victory over 12th ranked Georgia Tech. Alicia Dudeney and Bente Spee have proved to be a formidable duo, forming a 9-1 record thus far. The two freshman have been pleasant surprises for Florida this season, both have posted winning records and impressed at the UNF Invitational earlier in the year. Dudeney also holds the teams best singles record, currently sitting at 14-5 with two wins in national play.

Gainesville native Emma Shelton has emerged as one of the team’s top performers. The South Carolina transfer boasts an overall 13-5 record thus far, and is 4-0 in dual singles after defeating Florida State’s Anna Arkadianou. Last year, the former 5-star recruit and SEC Freshman of the Week helped lead the Gamecocks to the NCAA tournament.  The Buchholz graduate was ranked the No. 7 prospect in Florida during her time as a prep star.

After Thursday’s match against Old Dominion, Florida will face off against 24th ranked Florida State again. Despite falling to the Gators, the Seminoles still hold a strong 4-1 record. The match will take place in Lake Nona at the USTA National Campus.

Tyler Carmona is a junior journalism major at the University of Florida. Originally from Miami, Tyler played football as a wide receiver at the University of St. Francis before transferring to UF.
@@TylerCarmona
Previous Officially Revealed: the Washington Commanders
Next What’s next for 49ers?

The No. 10 Florida Gators lacrosse team is set to take on Old Dominion on …