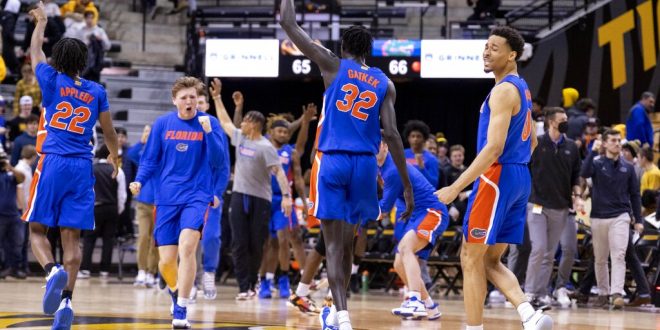 The Gators Men’s basketball team (14-8) hosts the Ole Miss Rebels (12-10) for the final time in the regular season Saturday afternoon. The first time the two teams faced off, the Rebels came out on top 70-54 in Oxford.

Florida is coming off a comeback 66-65 win at Missouri, while the Rebels nabbed a top-25 win against No. 25 LSU. The Gators carry a 4-5 SEC record into the matchup, while the Rebels enter at 3-6 in the conference.

On Jan. 24, the Rebels shocked the Gators with a dominant victory in Oxford. At the time, the Gators were on a three-game win streak, and the Rebels had lost four straight. Ole Miss simply outshot Florida in the game.

After the two teams went into halftime tied at 22-22, the Rebels broke out in the second half. Ole Miss shot 73.9 percent (17-23) from the field in the second half, the best half of shooting they’ve had against an SEC opponent since 2008 against Alabama.

On top of that, the Rebels held the Gators to a measly 13.8 percent (4-29) in 3-point shooting. Four Rebels finished in double-digits in scoring, and the team capitalized with 23 points off turnovers.

Jason Jitoboh, who has since been ruled out for the season with an injury, led the Gators with 12 points. Jitoboh was starting in the place of Colin Castleton, who remains sidelined with a shoulder injury, so forward Tuongthach Gatkek has been getting some minutes with both out. Gators Head Coach Mike White had this to say about Gatkek stepping in recently.

“What an odd situation. I mean, we didn’t think he’d log many minutes this year at all. But we thought he could be a good player down the road and he did too. And he was ready, you know, when his name was called here in these past couple of weeks. And he’s certainly got a ways to go in so many areas, but I don’t question his effort — ever.”

The Gators are eagerly anticipating Castleton’s return, but Gatkek will continue to get more minutes in his absence.

Both Teams At a Glance

Both the Gators and Rebels have been in solid form of late, with each winning back-to-back games. Florida put together a balanced offensive approach, winning against Oklahoma State in the SEC / Big 12 Challenge, and pulling off a true road test against Missouri.

The Rebels won by double digits against Kansas State in their SEC / Big 12 game and then knocked off No. 25 LSU on Tuesday for their first win in Baton Rouge since 2013.

Tipoff for Saturday’s game is set for 3:30 from Exactech Arena. The game will air on SEC Network.

I'm a third-year student at the University of Florida passionate about storytelling and sportswriting. My goal is to work in communications for a professional sports team after I graduate.
Previous Gators Gymnastics Travels to Battle Missouri Tigers
Next Santa Fe baseball falls to Tallahassee in high scoring affair